Canadian Police-Involved Deaths in May 2021

Canadian Police-Involved Deaths in May 2021

May was the deadliest month of 2021 yet, with at least 10 people being killed or dying through police actions
by
Jeff Shantz 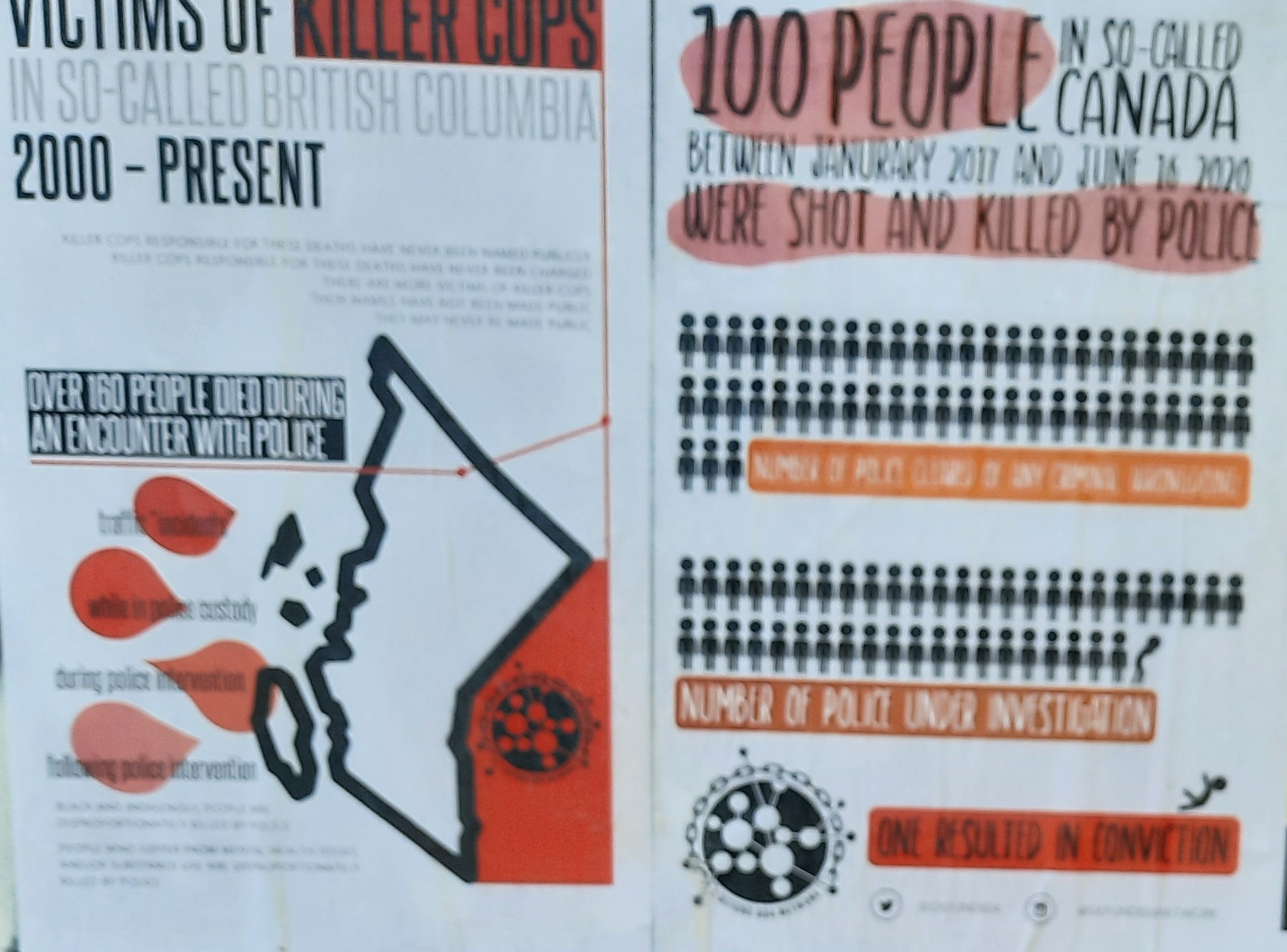 Canadian police have continued their bloody ways through May 2021, with at least 10 people being killed or dying through police actions during the month, the largest number for any month yet this year. So far in 2021, at minimum 37 people have been killed by Canadian police or died through police actions. This includes at least six deaths through police interactions in April and five in March. There were at least nine police-involved deaths in February and at least seven in January. If police killings continue at this rate, 2021 will be in keeping with previous years, when there have been at least 60 police-involved deaths in Canada.

Two of the deaths in May involved police “wellness checks” and one involved a person in mental distress, based on currently available information. Police are not about wellness. There have been numerous cases in Canada in which people have died from self-inflicted injuries directly following a police action against them.

May 1. Vancouver Police. In custody.

A woman died in Vancouver Police Department (VPD) custody on May 1, 2021. According to the Independent Investigations Office (IIO), the VPD arrested a woman in the 500-block of Powell Street on the morning of May 1, at approximately 8:55 AM, and transported her to VPD cells. At around 12:00 PM that day, she was found unresponsive in her cell. She was pronounced dead there.

May 7. Lloydminster RCMP. In custody.

A 26-year-old man died during arrest by Lloydminster RCMP (Alberta) in the early morning of May 7, 2021. The Alberta Serious Incident Response Team (ASIRT) reports that RCMP were called at around 5:00 AM regarding a man in the 52 Avenue and 35 Street area who was allegedly intoxicated. When they arrived at the residence, they reportedly found a man on the deck who allegedly showed signs of intoxication and agitation. Three officers engaged in a struggle with the man, taking him into police custody. At some point during his arrest the man went into medical distress and died at the residence.

Despite the victim dying during arrest, the Lloydminster RCMP General Investigation Section is continuing an investigation into the allegations against the man. This seems like an effort to legitimize the actions of the RCMP officers involved. None of the police claims about what happened have been confirmed publicly.

Bernie Herman, an RCMP officer with 32 years with the force, has been arrested and charged with first-degree murder in the killing of 26-year-old Braden Herman of Clearwater River Dene Nation. Braden Herman’s body was found in a wooded area of Prince Albert, Saskatchewan, on May 12 and the RCMP officer was arrested the next day.

Braden Herman’s sister, DeeDee Herman, has alleged publicly that her brother had been harassed by officer Herman for the last two years. She has also said that the long serving RCMP officer used his police powers to carry out the harassment.

A man was found dead in the early morning of May 13, following an RCMP “wellness check” a bit before midnight the night before in Surrey, British Columbia. The Independent Investigations Office (IIO) reports that Surrey RCMP say officers went to a “wellness check” in the 17000-block of 21st Avenue on May 12 at around 11:45 PM. According to the IIO, officers “reportedly spoke to a man at the home before departing.” The man’s death was reported by a family member shortly after 8 AM on May 13. At this point the IIO say that the victim was found dead “from an injury that appears to have been self-inflicted.”

A 60-year-old woman fell to her death in North York during a “wellness check” by Toronto police on May 18, 2021. The Special Investigations Unit (SIU) reports that Toronto police attended an apartment building at 5785 Yonge Street, near Finch Avenue, to check on the well-being of a woman. They reportedly went to a unit on the eighth floor and briefly spoke with a woman before she went to her bedroom to retrieve a document. At some point the officers were alerted that someone had fallen from the building, and it was determined that the person who fell was the woman the officers were speaking with. She was pronounced dead at the scene.

A perhaps surprisingly large number of people have fallen to their deaths during police actions.

May 20. RCMP. Crash during traffic stop.

A woman died during a traffic stop carried out by BC RCMP officers in Sicamous on May 20, 2021. According to the Independent Investigations Office, an eastbound vehicle was seen passing multiple vehicles near Salmon Arm ar around 4 PM. This included an unmarked police vehicle. They report that the officer in the unmarked vehicle attempted to stop the vehicle and contacted Sicamous RCMP, who also attempted to stop the vehicle.

At around 4:30 PM, police attempted to bring the vehicle to a stop on Highway 1 near the Bruhn Bridge in Sicamous. At some point the vehicle left the road. A woman passenger was pronounced dead at the scene. A male identified as the driver was transported to hospital for treatment of serious injuries.

Toronto police shot and killed a 28-year-old man who was in mental distress on May 22, 2021. According to the Special Investigations Unit (SIU), Toronto Police Service officers were deployed to a condominium unit at 1815 Yonge Street after ambulance workers contacted police regarding a man experiencing mental distress at around 8:30 PM. The SIU report that officers encountered the man on the third floor of the building. Police claim the man stabbed an officer. That officer and another fired their conducted energy weapons at the man before the second officer shot the man. The man was taken to hospital where he was pronounced dead.

RCMP officers shot and killed a man in the parkade at Red Deer Regional Hospital Centre on May 24, 2021. According to the Alberta Serious Incident Response Team, police responded to “multiple driving complaints” at around 9 PM and stopped a vehicle in the hospital parkade before opening fire and killing the driver. No further information is available publicly, including the nature of the “driving complaints” or the actions of police prior to opening fire and killing the victim.

A motorcycle rider died in a crash during a police pursuit in St. Catharines, Ontario on May 25, 2021. According to the Special Investigations Unit, a Niagara Regional Police Service officer allegedly saw a man without a helmet riding a mini-motorcycle eastbound on Welland Street at around 10 AM. The officer made a U-turn to follow the mini-motorcycle which then turned north onto York Street before turning onto Taylor Street and striking a pole, with the officer following. The man was transported to hospital where he was pronounced dead. The SIU has assigned three investigators and two forensic investigators to examine the death.

No other details are available publicly including why an officer would put someone’s life in jeopardy with a pursuit for not wearing a helmet. This is not the first time a police pursuit of someone not wearing a helmet has ended with that person dead.

A 50-year-old man died days after going into medical distress when Edmonton Police Service (EPS) officers restrained him in while he was in an ambulance on May 27.  According to ASIRT, EMS were dispatched to a residence in response calls regarding a man who had been found passed out on the floor at around 11:15 PM. A short time before midnight, EMS paramedics requested police assistance. Several EPS members arrived and assisted in restraining the man, who was already inside the ambulance. At some point, the man went into medical distress and became unresponsive. He was transported to hospital where he died on May 30.