A Costly Cop vs. Cop Farce

A Costly Cop vs. Cop Farce

From RCMP to Municipal Police in Surrey
by
Jeff Shantz 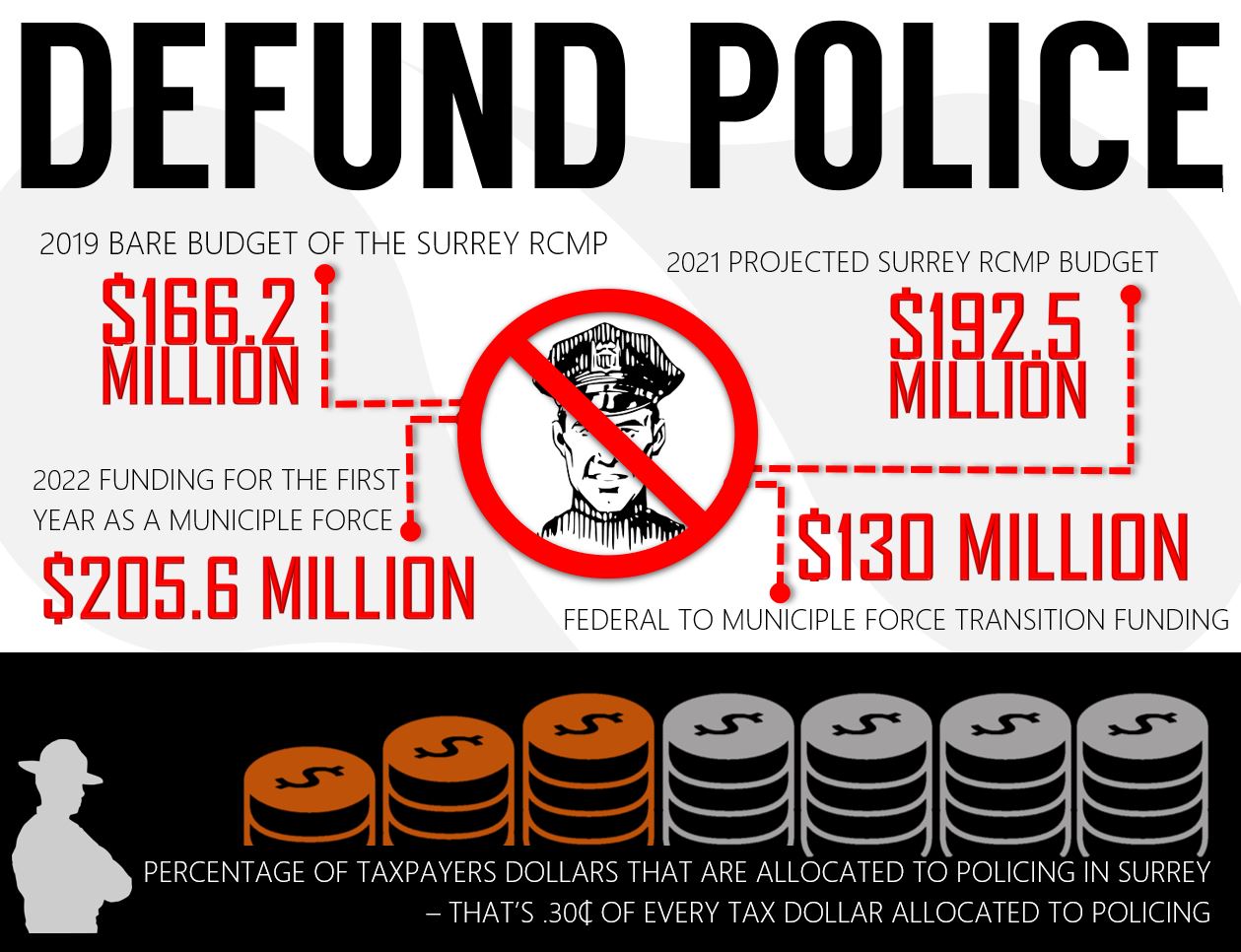 There is a recurring feature in the long running satirical Mad magazine called “Spy vs. Spy." It presents the exploits of two outrageously bumbling spies as they do more damage to themselves than to their opponent in their facrcical schemes of one upmanship. A police version of Spy vs. Spy is playing out in Surrey, British Columbia, as the city moves to replace the RCMP with a municipal force, the Surrey Police Service. We could say this cop vs. cop farce is unfolding with the hilarity of the comic magazine, if only it did not have such brutal real world impacts.

The City of Surrey’s decision to move to a municipal force to replace the RCMP has been marked by stumbling missteps from pratfall to face plant. First, they hired a new chief, Norm Lepinski, a former RCMP leader with some scandals in his recent background.

Lipinski was at the center of an ongoing controversy when a resident, Kiran Sidhu, was sprayed with a water hose by Lorraine Dubord, spouse of Delta police chief Neil Dubord, in June 2020. Dubord also allegedly shouted personal insults at Ms. Sidhu. Police decided not to lay charges against Lorraine Dubord, and there were questions. Earlier this year, it came out that Lepisnki set up a contract in which the Delta Police Department paid a communications-consulting firm $42,000 to publicly deal with the incident and accusations.

Under Lipinski’s term in Delta, two Delta Police officers were disciplined following an investigation into complaints of workplace and sexual harassment. Regarding multiple killer RCMP Monty Robinson, then assistant commissioner Lipinski said, "He won’t be fired outright, now that he's a convicted criminal, because he's still entitled to due process as a police officer under the RCMP Act."

Notably, most of the supposedly new leadership comes from the very force, the RCMP, that they are supposedly replacing. And they have their own problematic histories.

Perhaps most troubling is the appointment of superintendent Jennifer Hyland as Deputy Chief in Surrey. Hyland was the officer in charge of the Ridge Meadows RCMP when their officers shot and killed Kyaw Din in his home while he was in distress and needed care on August 11, 2019. The Din family has called for murder charges against the officer who shot Kyaw Din. They also called for superintendent Hyland to resign and have demanded police no longer take part in mental health calls. Superintendent Hyland should still be called to account for the killing of Kyaw Din and should not be leading anything in Surrey.

The questionable decisions extend beyond the officers themselves. In December 2020, it became public that Police Board member Harley Chappell was photographed with members of the Hells Angels with whom he had family associations. In February, Surrey Police Board member Bob Rolls, who served on the governance and finance committee, resigned seven months into his term and moved to Vancouver Island.

Then it was revealed, in March 2021 that the latest Surrey Police Service hire, Inspector Jeff Metcalfe, Divisional Duty Officer, BC-RCMP Criminal Operations was just coming off a 90-day driving prohibition for being impaired while driving.

The bumbling of the SPS should not prevent us from properly assessing the RCMP in Surrey, whose actions leave serious questions about their own credibility. This is a force that over the last few years has killed multiple people in Surrey who were in distress. This includes the infamous shooting of Hudson Brooks in 2015 under odious circumstances. It also includes the shooting of Nona McEwan and Randy Crosson in 2019, when the RCMP publicly suggested Mr. Crosson might have shot Ms. McEwan, even though they knew only police had fired.

In 2019, a woman fell to her death during an RCMP intervention. In 2018 a man in distress died during and arrest.

The RCMP routinely harass and criminalize poor and unhoused people. They have put in a lot of work into surveilling and criminalizing students, especially youth of color, in schools and in sports programs. Their gang panic programs treat Surrey’s youth as gangsters in the making.

Even the fact of new hire Inspector Jeff Metcalfe’s “90-day driving prohibition for being impaired behind the wheel” came not as a SPS officer but with the RCMP. Metcalfe was a 24-year veteran of the RCMP, including as the divisional duty officer for criminal operations.

To add another grain of absurdity to the situation, the National Police Federation, the RCMP police association, has started an astroturf campaign complete with website to spread RCMPropaganda against the SPS. The new force is a done deal but the RCMP are scrambling desperately to hold onto those multi-millions.

A clearsighted assessment finds both forces to be lacking. And we need to be straightforward about that.

Sadly, it seems that NPF leadership have decided to take a familiar low road in their efforts to keep the RCMP in Surrey—stigmatizing and criminalizing homeless people and drug users. At a February 24 “Surrey Digital Town Hall” Zoom meeting hosted by the Surrey Board of Trade, NPF president Brian Sauve said, “Homelessness and addiction have had a massive impact on small business.” NPF Pacific Region board member Trevor Dinwoodie also brought up “opiate use among the homeless on the Whalley strip” to justify the RCMP.

This is obviously troubling. It prioritizes the interests of business over marginalized members of our community. It also pits residents against one another. Stigma and criminalization keep people from accessing potentially lifesaving supports.

Community advocates have long pointed out the harm such stigmatization does to homeless people and drug users. They should not be used as props to justify police forces or their budgets. Rather we need community resources based on compassion, care, and support.

The Most Painful Punchline

The least funny part of this increasingly twisted joke is the massive use of community resources on policing. This comes at the cost of necessary community resources that could positively contribute to collective health and wellbeing in Surrey. Community spaces, health care, child and youth resources, harm reduction, shelter, education, etc. While community members are calling for defunding of police and a reallocation of funds to community-based resources, Surrey council is throwing hundreds of millions of dollars at police. This was reflected in several cuts to community venues, including an Indigenous healing center and multiple community and recreational centers.

The base expense of the transition capital costs alone have ballooned from $45 million, in estimates made in June 2019, to $63.7 million. That is just the move from one uniform to another. It does not count additional pay costs, new technology and infrastructure costs, IT services, etc.

While the new cops are mostly old RCMP, they are being paid much more to put on new uniforms. The chiefs are being paid as much as $335,000 with benefits. That amount is around $50,000 more than an RCMP officer at equivalent rank would be paid. Both are too much.

Trying to cover up the early missteps has also cost. In December 2020 and January 2021 alone, the Surrey Police Service ran up a public relations cost of $34,769.89.

Overall, the projected costs of the first year of the SPS is $205.6 million. In 2022. That is an enormous jump over the 2019 budget of the RCMP which was at $166.2 million. Either way, the biggest joke of all is being perpetrated against the people of Surrey. Hundreds of millions of dollars for cops, whichever the uniform, while community health and wellbeing are made to suffer.