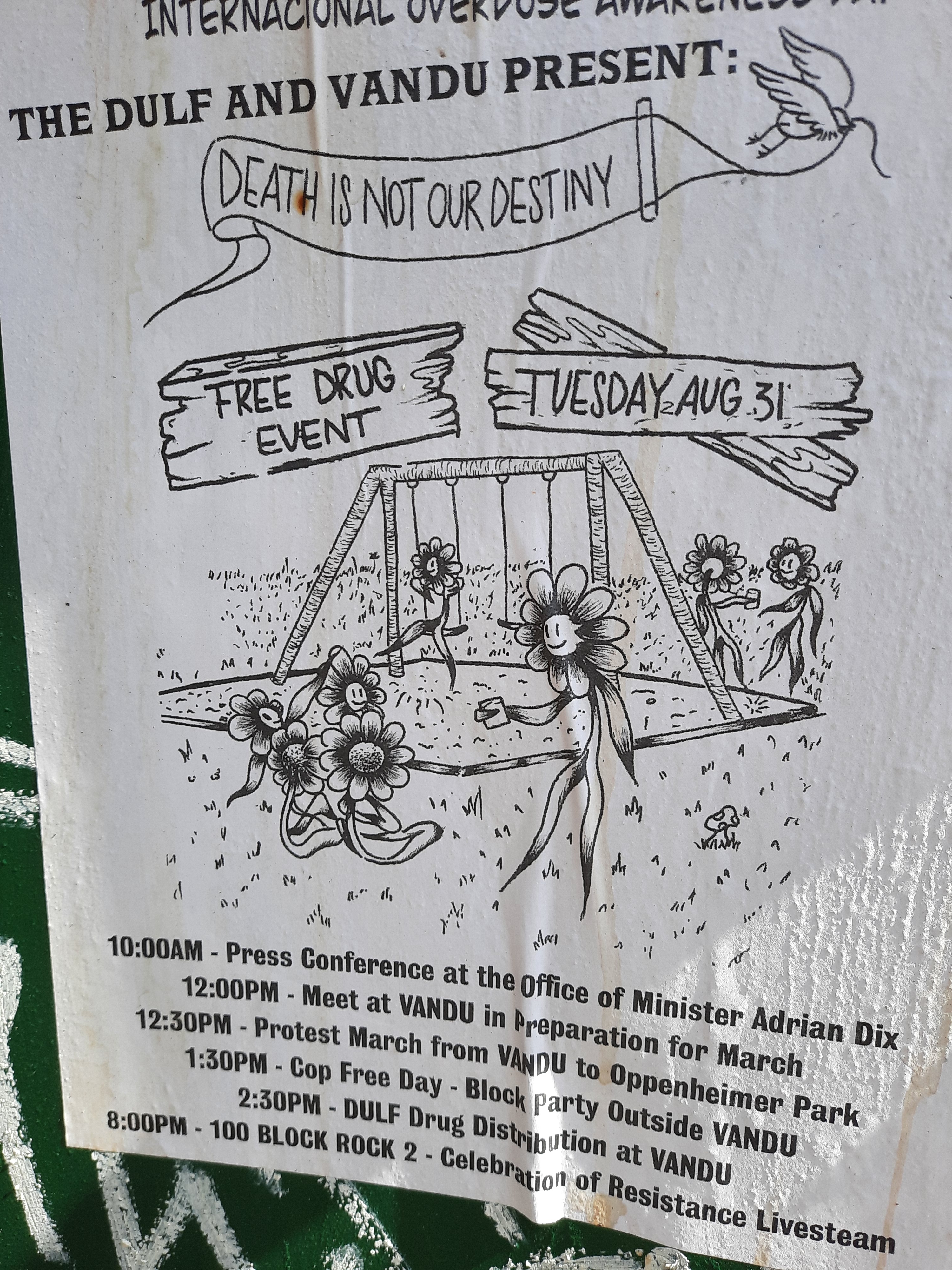 August 31 was International Overdose Awareness Day (IOAD). Drug users and allies in Vancouver took to the streets in a powerful direct action organized by the Vancouver Area Network of Drug Users (VANDU) and the Drug Users Liberation Front (DULF), distributing safely supplied drugs and remembering and celebrating friends and family members—and their own resilience and commitment to fight against government policies and practices that are killing people.

More than 23,000 people have died in Canada in the last five years from drug overdoses. During a news conference on IOAD21, British Columbia’s Chief Coroner Lisa Lapointe reported that drug toxicity is now the leading cause of death in the province for people between 19 and 39 years of age. The majority of those deaths are men who were alone at the time of death.

To be clear, this is a crisis of criminalization, drug toxicity, and inhumane policy. These impose conditions of unsafe supply and using alone. It is nothing less than social murder.

Governments at all levels, and under all parties, continue to act in ways that ensure people will continue to die. Their approach remains one of criminalization and punishment, rather than care and harm reduction. Drug busts are a regular theater for police forces seeking to increase their budgets and fend off calls to defund. Arrests and prosecutions continue to subject people to state violence, leading many to use alone and outside the glare of police surveillance while simultaneously busting supply chains that can be known, trusted, and safer.

A recent report points out that in 2020, police in Canada laid over 30,000 charges for drug possession (not including cannabis), a number that is little changed from 2019. There are more than 4,000 people in federal prison in Canada on “drug offences” alone. This criminalization and punishment is directed in colonial and racist fashion, disproportionately targeting Indigenous and Black people and communities. The drug war has always been colonial and racist social war.

Instead of criminalization and the failure to provide safe supply, drug user groups like VANDU and DULF argue, and fight, for safe supply and decriminalization. On IOAD21, they made safe supplies of heroin and cocaine available to members who registered. This was part of a larger day of action that included a press conference at the provincial health minister’s office, a march in the city’s downtown eastside, music, and resource sharing.

They submitted an open letter to Health Canada requesting a formal exemption from federal criminal drug law to cease prosecutions for possession or trafficking, allowing a “compassion club” model by which drug users can purchase, test, and distribute drugs to members on a basis of need, not profit.

The VANDU and DULF day of direct action was an expression of mutual aid, solidarity, and autonomy. It showed the need to break unjust and deadly laws in a context in which the state is committing social murder. Acts of real justice to stop social murder hiding behind a veneer of legality.

Jeff Shantz is a long-time anti-authoritarian organizer and a professor at Kwantlen Polytechnic University in Vancouver.