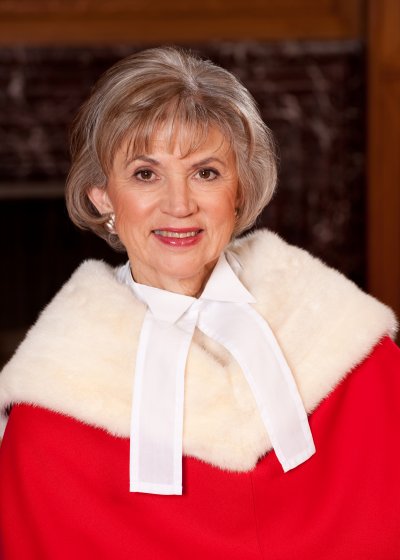 We thought you might want to meet Canada's highest paid santas... Ladies and Gentlemen, the Supreme Court.

A Chretien Appointment, Ms. McLachlin is the gran poo-bah.

According to FWD/Forward blog, In October 2010, Chief Justice of the Supreme Court of Canada, Beverley McLachlin, gave a talk in Halifax about the interactions between people who are mentally ill (her term) and the justice system of Canada. During the talk she argued regarding the case of 28-year-old Byron DeBassige, that she believes the police wouldn’t have shot DeBassige over two lemons and a knife had they known he was ill. This of course, goes against the facts of numerous cases, such as Howard Hyde, and Reyal Jensen Jardine-Douglas, where the the police were firmly and repeatedly told the person they killed was mentally ill.

Lebel was appointed by Chretien in 2000. In 2005, the Supreme Court of Canada legalized so-called swingers' clubs on the basis of the right of consenting adults to do what they wanted if there is no harm to others. In a dissenting opinion, two justices, Michel Bastarache and Louis LeBel, had this to say about harm:

According to contemporary Canadian social morality, acts such as  child pornography, incest, polygamy and bestiality are unacceptable  regardless of whether or not they cause social harm. The community  considers these acts to be harmful in themselves. Parliament  enforces this social morality by enacting statutory norms in  legislation such as the Criminal Code.

In short, the two men said, you need evidence to establish harm. The two justices, deliciously comfortable in their ability to determine acceptable morality, clarified that some acts are unacceptable by their very nature because they lead to "societal dysfunction or to the creation of a predisposition to anti-social conduct."

Appointed by Paul Martin, ‘Rosie’ led the way in the 5-2 decision that came out earlier this year agreeing that yes, police do need a warrant order to obtain live, real-time text messages from a mobile provider. Even higher standard than a general warrant, which the Canadian government argued was adequate.

Appointed by Stephen Harper in 2006.

Rothstein’s appointment to the Supreme Court tipped the balance of the court towards the preferences of Harper’s Conservatives early on. According to an unsigned editorial in the National Post, “After decades of aggressiveness from the Court in creating new safeguards for the rights of arrestees and prisoners, it was a welcome surprise to receive an essentially pro-police majority decision that eschewed activism.”

Enough said? Well, the National Post editorial calls Rothstein Canada’s “newest puisne justice.” So we were like Puisne? What the fuck is that?

(in the UK and some other countries) denoting a judge of a superior court inferior in rank to chief justices.

ORIGIN late 16th cent. (as a noun, denoting a junior or inferior person): from Old French, from puis (from Latin postea ‘afterwards’) + ne ‘born’ (from Latin natus). Compare with puny.

The puny justice, huh? Well, there ya go.

Cromwell is the most recent appointment to the Supreme Court, along with Justice Rothstein. His blind loyalty to the Harper government was questioned when he voted in unanimity (along with Rothstein) that insite, Canada's first safe injection site, should stay open.

Appointed in 2011 together with Ms. Karakatsanis.

“Some of his decisions, like one last December hammering convicted terrorists with life sentences, would no doubt impress politicians with a law and order agenda.” That’s from a 2011 Toronto Star article, where he was presented as a bit of a firebrand who is willing to comply in order to satisfy the powerful. Monolingual Anglophone. His earlier judgements at the Ontario Superior Court, where he served for 10 years, were considered progressive with regards to civil liberties but more recently his viewpoints are considered to have shifted towards the right. "Occasionally he's written judgments which are pro-accused but, more recently, he seems to have been rather conservative, to say the least, on charter rights. So in that sense, it might be an ideological choice," Queens University law professor Don Stuart said in an interview with the Huffington Post.

The National Post called her the “Supreme Court’s new trend-bucking wild card,” and every article about her 2011 appointment notes she is Canada’s first Greek-Canadian Supreme Court Justice. She has, however, ruled against the police. She has, however, ruled against the police. The same National Post article notes that “in one of her most significant rulings to date, Justice Karakatsanis handed down a judgment at odds with the current federal government’s tough-on-crime agenda. In March, Justice Karakatsanis found that police had violated the Charter rights of a Sudbury teacher when they searched his school laptop without a warrant.”

In March, Justice Karakatsanis found that police had violated the Charter rights of a Sudbury teacher when they searched his school laptop without a warrant.” All, right, all right, the National Post did a good job on this one. Here’s more:

But she made her mark as a senior bureaucrat in a provincial Conservative government that has gone on to produce several federal cabinet ministers. She was deputy attorney-general under then-AG Jim Flaherty, now the federal finance minister, and was tapped by Mr. Harris to become Secretary of the Cabinet, the government’s most senior bureaucrat. She garnered a reputation as an competent administrator, including telling a provincial committee hearing in 2000 that her office was pursuing one of the most aggressive crackdowns in Canada on parents whose child support payments were in arrears by directly electronically garnish paycheques, throwing delinquent parents in jail and suspending the driver’s licences of those who didn’t pay.

Wagner replaced Justice Morris Fish, who was considered to have been the last remaining Supreme Court Justice who consistantly advocated for the accused. He is a corporate lawyer. Prior to being appointed to the Supreme Court he was a “construction law litigator from MontrÃ©al” whose “practice focused mainly on professional liability of lawyers, accountants, architects and engineers, and on commercial litigation related to, namely, real estate law, oppression remedies and class action suits.” On a totally unrelated note, or not, the previous two mayors of Montreal were forced to resign amid accusations of collaborating with the mafia in the construction industry. Ahem.

Harper Appointment. Nadon’s appointment was controversial because Nadon sat on the Federal Court of Appeal in Quebec and not a Quebecois court.

Nadon came under fire for boasting like a teenager to an Ad Hoc Commons committee that was reviewing his appointment:

"During my youth, my ambition in life was to become a hockey player, which may seem surprising looking at me but those days were different. In fact, I was drafted by the Detroit Red Wings when I was 14," he said.

"However, around the age of 16, my father read me the riot act and said that I had to decide whether I wanted to study or play hockey. I opted for studying. It now seems I made the right decision," the justice went on to say.

"I wouldn't have dared say that at 14 that Red Wings were going to consider me for their hockey team the next year. I would have been an idiot to say that. That's not what I meant," he said.

Nadon only meant that he was going to be part of the Detroit Red Wings' organization, he said. There you go, Canada's highest paid santas. We will be updating tomorrow on the status of the first ruling. Stay tuned.