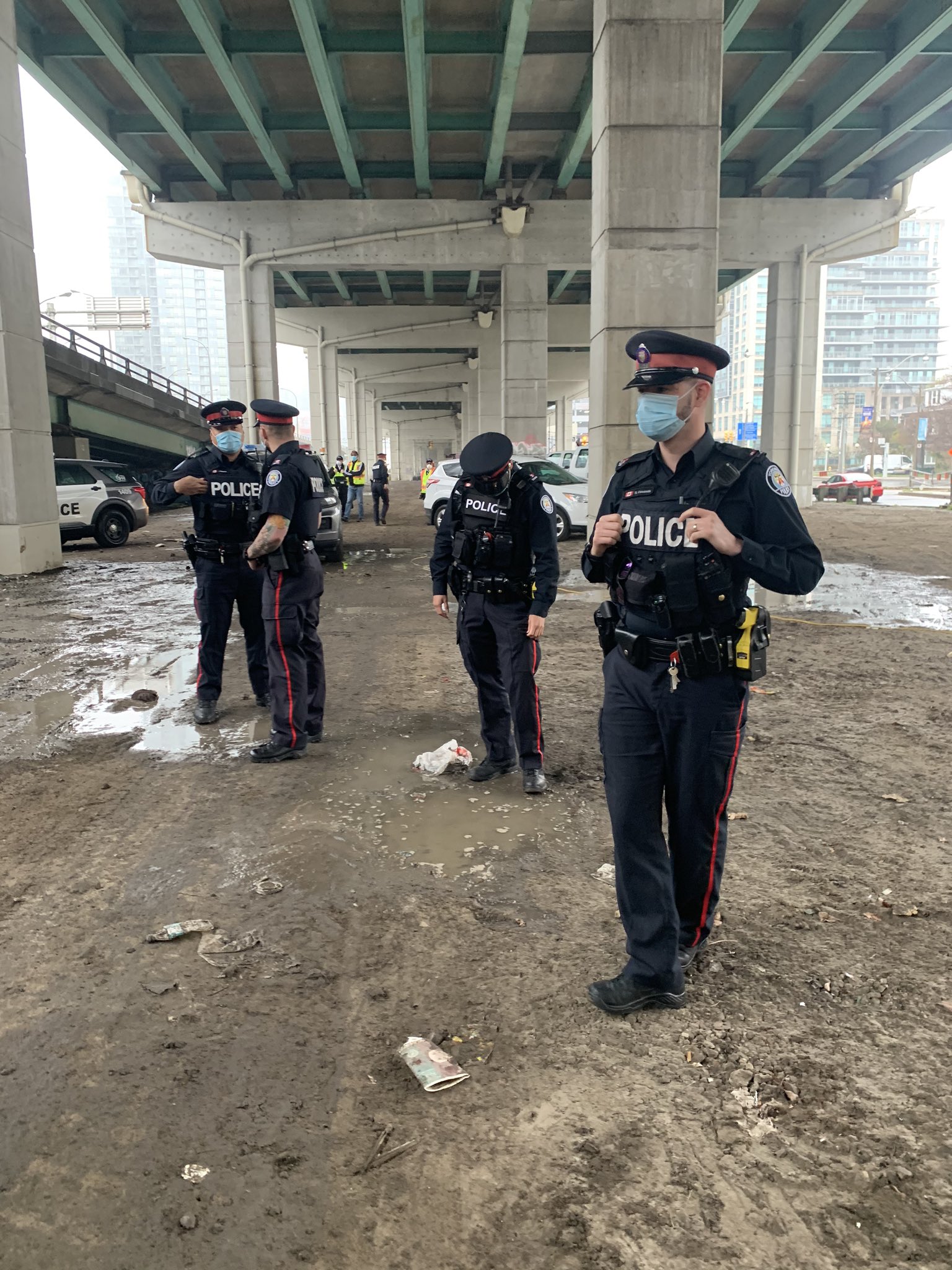 Police have been granted even broader powers during the COVID-19 pandemic, putting vulnerable groups, including visible minorities, migrant workers and homeless folks, at greater risk of police harassment and of having their data collected and stored, civil rights advocates say.

Since March 31, all provincial law enforcement officers in Ontario have been authorized to demand identification from people suspected of breaking emergency measures under the Emergency Management and Civil Protection Act (EMCPA).

“This is a VERY BAD IDEA,” the Migrant Workers Alliance for Change (MWAC) posted on Facebook on April 1, the day after the sweeping law was rolled out in Ontario. “It puts people without immigration status at immense risk and will be used disproportionately against Black, Brown and poor people.”

Aside from police, the measure effectively deputizes all special constables, such as TTC and community housing constables, municipal bylaw enforcement officers, and First Nations constables with the authority to demand identification and write people up.

“In theory,” said Noa Mendelsohn Aviv, the equality program director at the Canadian Civil Liberties Association (CCLA), “this is not an arbitrary stop. It has to be connected to reasonable grounds to believe that an offence has been committed.”

The problem is that there is a lot of confusion among civilians, and "likely" police officers themselves, about what constitutes “reasonable grounds,” she said.

This has resulted in fines and tickets being doled out for everything from “lingering” on Toronto’s park benches to people walking their dogs.

“So, although it’s not theoretically a broad license,” said Aviv, “considering how broad these orders are (and) how unclear they are… it effectively amounts to a broad license to officers to stop people in a lot of different situations.”

According to a Police the Pandemic Enforcement Report covering the April 14 to May 1 period, there are 4,575 people who have been “ticketed/charged on separate occasions… across Canada, resulting in over $5.8 million in fines.” The majority have been in Quebec (3048) and Ontario (930), specifically in Montreal (1848), Toronto (594), and Halifax (216). The report is by researchers Alex Luscombe and Alexander McClelland.

The authors note that while the total might seem like a “very small number,” the cases are not necessarily of “unique individuals as some people have already been fined/charged multiple times since police responses to COVID-19 began.”

Additionally, it found that the “majority of enforcement actions...have been for failure to physical distance/comply with minimum gathering rules.”

Organizations like the MWAC and Justice 4 Migrant Workers (J4MW) point specifically to the issue of carding, which has been denounced for disproportionately targeting people of colour.

“Actions by OPP and other police agencies, such as ticketing and fining, will have significant economic implications for a population that lives and works below the poverty line,” according to a statement on the J4MW website.

“In addition, ticketing migrants may also have dire consequences on their immigration status and the ability of workers to return to Canada to work in the future."

In April, a coalition of groups released a document to help people affected by the law navigate the system. The document is titled, “Migrants Know Your Rights! Ontario’s Emergency COVID ID Requirement." A copy has been attached at the bottom of this report.

The law, it states, "particularly endangers Black and Indigenous communities and raises the risk of migrants being stopped, arrested, and detained by immigration authorities who are often called in by frontline police and law enforcement officers.”

The document was authored by No One is Illegal Toronto, the Ontario Coalition Against Poverty, Butterfly: Asian and Migrant Sex Workers Support Network and the International Human Rights Program at the University of Toronto Faculty of Law.

Vincent Wong is the William C. Graham research associate for the international human rights program at the University of Toronto’s law school. In a phone interview with the Media Co-op, he explained that there is a “clear overlap” between “racial profiling through street checks and carding…and the risk of migrants getting checked," detained and deported.

According to him, brown, Black and Indigenous folks who bear the brunt of racist carding practices are also at a much higher risk of being profiled as “not being Canadian” enough.

“You could probably guess what the indicators people would use are,” he said. “If your English has an accent, or it might be that you’re not white, or the clothes that you wear seem not Canadian… So, if you get profiled for that, it’s likely the police will be calling the [Canada's Border Services Agency] to check your status.”

The report found that Toronto cops in particular "practice racial profiling to inquire about Torontonians immigration status, in contravention of their own 'Don't Ask' commitment, … more often than the RCMP, and more often than the police services of Montreal, Quebec City, Calgary and Vancouver combined."

Between 2014 and 2015 alone, data showed that Toronto police were responsible for 31 percent of all calls to the CBSA “across the country," and that 83 percent of the time it was to perform a "status check."

The report thus concluded that the "[Toronto Police Service] is not accessible to people with precarious immigration status and…[puts] them in danger of indefinite detention without charges or trial of deportation to places where their lives may be at grave risk."

A “violation and an infringement”

The new powers also allow officers to fine anyone who refuses to produce their identification. Before COVID-19, only the police had that power, and that was only under the Highway Traffic Act.

This change creates an added danger for migrants, as they often don’t have or don’t carry their ID “for risk of being detained or reported,” said Wong. Now, they risk getting an enormous fine (between $750 to $1000) if they don’t produce their ID, or potentially having the CBSA called if they do.

“It’s damned if they do and damned if they don’t,” he said. “It’s not really a choice... with migrants when they have these many potential law enforcement [authorities] that could book them.”

Migrants are also at higher risk because, for many, self-isolation is not an option. Many essential workers are often visible minorities, and many of them are migrants with precarious status who don’t qualify for the government’s Canada’s Emergency Relief Benefit (CERB) since they lack a valid social insurance number.

Aviv said the CCLA is also worried that the police are collecting people’s personal data indiscriminately and that they haven’t made clear exactly what they intend to do with it once the pandemic is over.

“We have a fundamental right to privacy… and for the state not to collect and retain and share information about us… That, alone, is an infringement and a violation.”

According to the Police the Pandemic Report, the law “allows for the sharing of an individual’s name, address and date of birth, and whether" they've tested positive for COVID-19 among the 50 municipal police and nine self-administered First Nations police services in Ontario, “in addition to the Ontario Provincial Police (OPP).”

Police forces have agreed to only keep the information during the pandemic and inside “a separate database from the Canadian Police Information Centre (CPIC)."

But "no specific protocols have been communicated publicly about how the data will be managed, or what oversight mechanism will be in place," nor whether "COVID-19 positive patients are being informed or are aware that their health data will be shared with police.”

The Police the Pandemic report also found that “28 different regions of Canada” had a “dedicated phone line or online ‘snitch line’” system set up to encourage people to tattle on each other. And that’s a conservative figure.

"There are likely many more of these initiatives that have yet to come to our attention. Already, we can see that these lines are having an impact on policing," it states.

The majority are in Ontario.

Mainstream media have reported on various cases of people being fined and ticketed as a result of someone calling in.

Wong, the international law research associate, refers to these as “punitive surveillance” tactics that only have the effect of dividing communities.

Instead, he says, migrants should look to the many support networks such as the Caremongering Facebook groups that have popped up to support communities, as well as the many other volunteer-driven groups helping deliver food and resources to those in need.

“There’s two competing ways of dealing with it,” he said.

“One is a very punitive surveillance state punishment-based perspective,” which is a direct result of public spaces being policed and “certain people [being seen] as threats that need to be eliminated from those spaces.” This is driven by fear and racism.

The other “addresses it from a needs-based perspective” which prioritizes volunteerism, mutual aid and the sharing of any available resources and skills, which can help prevent transmission of the disease. Translation skills, verbal and written, among immigrant communities, for example, are crucial to help people access and understand the latest COVID-related development and news.

On a more concrete policy level, Wong said all migrants should be granted “access to full citizenship rights,” at least during the pandemic.

“We’re not going to deprive these people the right to help and [to] public services because of their status,” he said.

“Because, in a practical sense, no one is illegal.”