by
Arielle Friedman
This post has not been approved by Media Co-op editors! 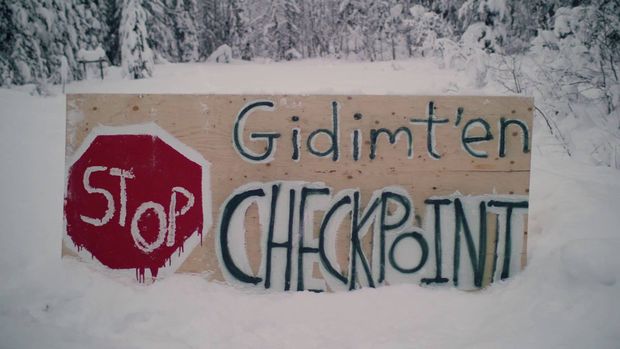 On January 7th, Canada stumbled into the global spotlight following RCMP raids on the Gidumt’en camp in Northern BC.

The RCMP were enforcing an injunction granting Coastal GasLink access to the Gidumt’en camp, one of two camps set up by Wet’suwet’en clans to defend their territory from pipeline construction. The raid resulted in fourteen arrests. In response, thousands of people gathered in over sixty cities around the world—from Toronto to San Fransisco to Stockholm—to support the Wet’suwet’en peoples and their opposition to the pipeline.

Tensions eased on Friday, January 11th, after hereditary chiefs agreed to allow Coastal GasLink to carry out pre-construction work beyond the access point. The Unist'ot'en—the other Wet’suwet’en clan who have established a traditional camp along the proposed pipeline route—released a statement explaining the context of this decision, stating, "We have demonstrated that this fight is about more than a pipeline; it is about the right of Indigenous peoples around the world to exercise Free, Prior, and Informed Consent."

The statement echoes the wording of Article 19 of the UN Declaration of the Rights of Indigenous Peoples which reads, "States shall consult and cooperate in good faith with the indigenous peoples concerned through their own representative institutions in order to obtain their free, prior and informed consent before adopting and implementing legislative or administrative measures that may affect them."

Coastal GasLink is a subsidiary of TransCanada, now called TC Energy, who argue in favour of the pipeline, which will carry natural gas from near Dawson, BC to ports in Kitimat. They point out that they've received consent from all Indigenous nations along its route. However, some Indigeous leaders argue that this consent is insufficient, since while band council chiefs along the pipeline's route have signed, many hereditary chiefs have refused.

This struggle gets to the heart of deep questions surrounding Indigenous sovereignty in Canada. Wet’suwet’en leaders maintain that since each clan governed its own territory historically, the centralized band councils established by the Canadian government have no right to make territorial decisions on behalf of individual clans. Several sections of the UN Declaration of the Rights of Indigenous Peoples could be interpreted as asserting Indigenous peoples' right to determine their own leadership stuctures (like Articles 3–5), undermining the band council system, and with it, the justification under international law for many resource extraction projects currently underway.

To support Wet’suwet’en opposition to the pipeline, you can donate to the Unist'ot'en Camp Legal Fund or to the Gidumt’en access point.