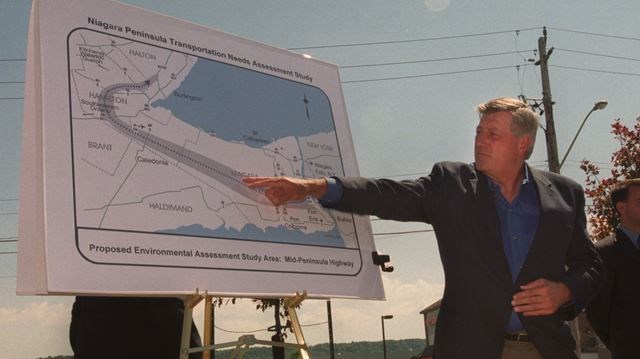 Ontario Progressive Conservative leader Patrick Brown, who is riding high in the public opinion polls to become the next Premier of Ontario, made disturbing remarks regarding empathy on July 25, 2016. Brown was commenting on the mid-Niagara Penninsula Expressway, addressing the Flamborough Chamber of Commerce at a business round table held at the Dutch Mill County Market, in Millgrove, ON.

Flamborough is a quaint rural community of the City of Hamilton. Its landscape of forests and farms are a green island of the greater Toronto region. It is also home to the African Lion Safari.

Flamborough’s bucolic landscape of pastures and forests near the spectacular waterfalls of the Niagara Escarpment is where television episodes of The Road to Avonlea were filmed. (Most of the CBC recreations of pastoral celebrations of rural life in Prince Edward Island were filmed in Westfield Pioneer Village in the heart of Ontario’s Greenbelt.)

A lot of effort by ecological restorationists and conservationists has been put into making the beauty landscapes of Flamborough celebrated in the CBC’s pastoral epic dramas. The most revealing aspect of this reality is by one of Anne of Green Gables' favourite forested paths. It is goes through an ecological restoration planting of coniferous trees. Such evergreen plantings were typically used to bring desertified landscapes, scarred by deforestation and resulting blow sands, back to life.

Like television viewers in awe thinking they are seeing Prince Edward Island rather than the Greenbelt in the City of Hamilton, few appreciate the wonders of rural Ontario’s rural landscape. It was clear this was happening in Flamborough when Ontario’s Premier-in-waiting discussed reviving the mid-peninsula expressway. He also denounced plans to double the size of Ontario’s Greenbelt.

The Greenbelt is quite connected to the path that Anne took through the restored evergreens that launched the Anne of Green Gables series. The legally protected status ensures that the former desert landscape brought back to life by the massive plantings of evergreens is not destroyed by the concrete wasteland of sprawl. Now there is a serious danger that Greenbelt lands around Hamilton, including Rockton, may be threatened by the easing on restrictions of expansions of rural hamlets.

Many hoped that when Brown became PC leader he would bury the support for the mid-Niagara Peninsula Expressway. Unpopular in Burlington (Click here for the video of Stop The Escarpment Highway Coalition), where it would cut through the Niagara Escarpment near majestic Mount Nemo, it is beloved by Conservative politicians and activists in Flamborough, rural Hamilton, and throughout the Niagara Region. The City of Hamilton and Niagara Regional Council, dominated by activists in the Conservative Party, have been consistently calling for the construction of the  mid-peninsula expressway since the early 1990s.

In his speech to the Flamborough Chamber of Commerce, Brown stressed the need to review the cancellation of the mid-Peninsula expressway by the Ontario Liberal government. He promised it would be “very seriously studied” by a Conservative government lead by him.

The mid-peninsula expressway’s cancellation followed a long environmental assessment imposed by the Ontario Superior Court of Justice  in response to a cased brought by the City of Burlington.  In reviving the debate, Brown gave the rationale that there is a need for “empathy for the advocacy” put into the project by past Conservative leaders, notably his predecessor, Tim Hudack.

Empathy is an important word. It means being deeply connected to others. Such bonding applies to both people and the natural word. It can mean a loving caring attitude towards human beings and a deep bond with the natural world. Brown’s concept of empathy is, however, quite disturbing.

Brown’s empathy is reminiscent of what during the Soviet Union during the 1970s was termed the “era of stagnation”. This was encapsulated by the expression “respect for cadres”, meaning the ruling elite of the Communist Party.  For Brown empathy means feeling for past Conservatives defending an expressway through the rural heart of Niagara, across the Niagara Escarpment and enchanted rural landscapes.

What makes Brown’s empathetic defense of the mid-peninsula expressway for his fellow PC politicians concerning is that it collides with empathy for the wildlife that could be killed by the project. My understanding for the importance of empathy increased through my participation as a member of the Community Advisory Group (CAG) on the mid-peninsula expressway. (At the time it had been re-branded as the Niagara GTA West Corridor)

The CAG group on the NGTA corridor found a lot of technical reasons to stop the mid-peninsula expressway. One was the realization, drawn to our attention by a Professor of Engineering of McMaster University, Robert Korol, that the capacity of existing expressways can be increased by stacking them, meaning putting lanes on top. Another was declining motor vehicle use by youth. One of the biggest issues was how good local transportation strategies could reduce clogging of the Queen Elizabeth Highway in peak periods.

While technical considerations ultimately prevailed in the CAG forums, what proved to me to be most convincing was empathy. What pained me the most was an experience I had when, because of a last minute cancellation of a ride share, I was forced to travel via taxi from my home in St. Catharines to the CAG meeting in Grimsby. The taxi driver told me of his horrible experiences during the first couple of weeks of the operation of the Red Hill Creek Expressway. What erupted was a terrible wildlife slaughter. For him it was particularly upsetting to see all the dead deer killed in collisions. He assumed that the road kill horror show ended only after all the wildlife that might cross the expressway had been killed.

For me empathy regarding the mid-peninsula expressway concerns feeling the pain of the wildlife that may be killed by it. For Brown, it seems to be honouring his fellow Conservative politicians who are immune to it.