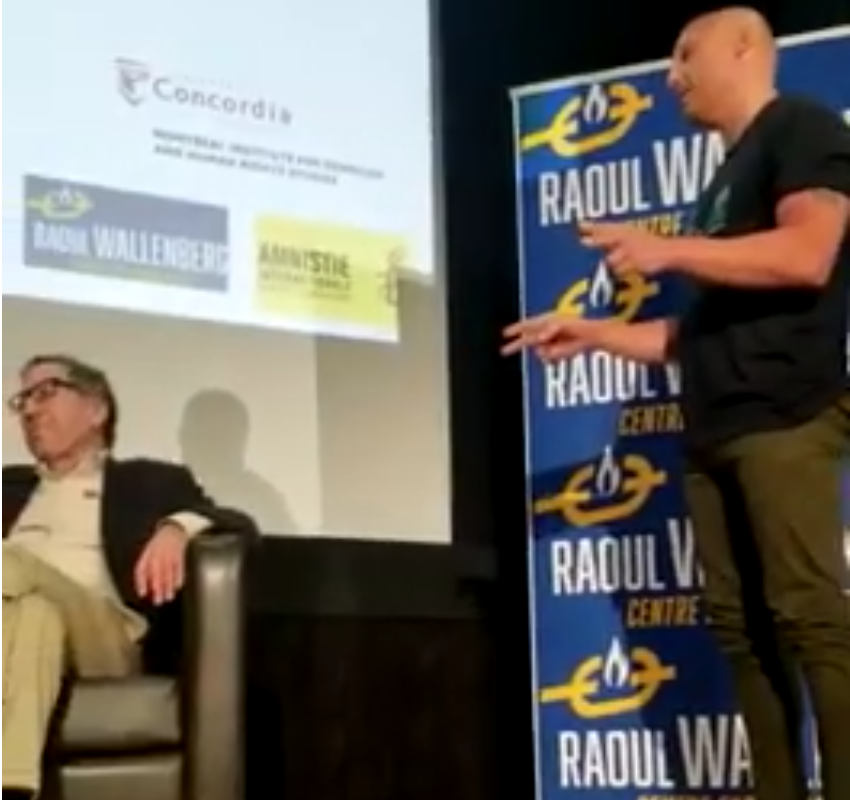 As a day-long event on June 3 at Montreal’s Concordia University looking into various human rights issues wrapped up, a human rights activist demanding justice for Palestinians asked the last speaker of the day -- a former liberal minister of justice -- a very pointed question:

“Is there anything that Israel can do that will elicit a criticism from you?” asked Dimitri Lascaris as he disrupted the event in order to challenge Irwin Cotler on his refusal to condemn Israel’s attacks on Palestinians at the Gaza border last Month.

“Is there any crime it can commit which will cause you consternation?”

The protest was planned alongside and recorded by writer and activist Yves Engler and Malcom Guy of the Quebec Movement for Peace.

The video opens with Lascaris, an independent journalist and human rights lawyer, questioning Cotler on the murders of “journalists, medics, disabled persons by Israeli forces at the…so-called border of Gaza.”

This past May, Israeli Defense Forces once again attacked demonstrators on the Gaza border, shooting at least 16 protestors and one Canadian-Palestinian doctor. A year ago, Snipers killed as many as 60 people during demonstrations.

Yet, Cotler, who was recently nominated for the Nobel Peace Prize, has not only failed to condemn these murders but has throughout the years repeatedly defended Israel’s attacks on the Palestinian people.

From referring to West Banks illegal colonies as “disputed territories” to justifying the killing of 1,400 Palestinians in Gaza in 2008-09 to publicly lamenting the Federal Liberal government’s criticism of the most recent massacre at the hands of snipers, Cotler has been an ardent apologist for Israel’s crimes and violation of international law.

“Cotler, as former justice minister, had a particularly important role to play in defending international law,” Lascaris later told The Media Co-op in a phone interview, referring to Israel’s illegal settlements which violate Article 49 of the Fourth Geneva Convention.

“So I realized that as one atrocity after another was being inflicted on the Palestinian people, Mr. Cotler was either remaining silent or actually defending Israel -- that he was not a genuine defender of human rights.”

In the video, Cotler as well as some of the presumed organizers berate Lascaris as they complain that his freedom of speech is “not a right to disrupt our event.”

“Oh, yes, it is,” responds Lascaris, who wears a Free Palestine t-shirt, as some audience members can be heard chanting “Palestine will be Free!” and “answer his question, please!”

“I object to somebody who was the justice minister of a country of which I am a citizen apologizing for the heinous crimes of an apartheid regime…I will not tolerate this and I will disrupt your event in order to express my objection to this outrage.”

Though the room was only “half-full” of mostly Cotler supporters, as Lascaris points out in the video, he later said that he is confident that “through the advantages of social media” his disruption will have reached the right people.

Near the end of the video, Cotler tries his luck with a trite and tepid answer, claiming that he’s “always supported the two-state solution.”

Calling him a “fraud when it comes to human rights,” Lascaris quickly replies that “there is no longer any reasonable prospect of a two-state solution because of Israel’s theft of Palestinian land.”

As Lascaris is escorted off the stage, a few scattered applauses can be heard, and the person recording congratulates him for his effort.

Cotler is left sitting in his chair holding the microphone as he attempts to cover the fear in his face with a smug half-smile.

Speaking with the Media Co-op, Lascaris later affirmed that to him the “only solution is a one-state solution -- and nobody should find this appalling.”

“The Israeli government has zero interest, and is openly stating it, in negotiating a two-state solution,” he said. “Everybody within boundaries of…Palestine and all those who were expelled and their descendants should be allowed to return, should have one vote, should all be treated equally and should be constituted for protection of rights of Palestinians, Jewish persons and others living within the boundaries of historic Palestine. That would be a true democracy.”

CORRECTION: A previous version of this article suggested that Irwin Cotler had been awarded the Nobel Peace Prize. He has only been nominated and has not received it as of yet.