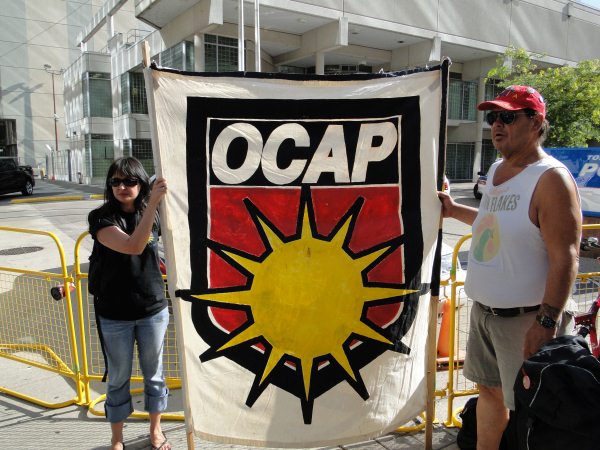 Eleven peaceful protesters were arrested Wednesday, for the crime of speaking out against cuts to Ontario Works and Ontario Disability which take away food from sick people. Lisa Schofield, an organizer with OCAP (the Ontario Coalition Against Poverty) said “it’s clear that they they are using the security budget to police poor communities. The austerity budgets that they are bringing down will be brought with lines of riot police."

In an OCAP press release Anne Abbot said "I went to the demonstration to demand the special diet not be cut and that welfare and ODSP rates be raised 55% for those of us on social assistance. Instead, I was arrested and the police called me "a pawn" because I am disabled. I am not a pawn. Disabled people fight against governments that make and keeps us poor everyday, and we will fight until
we win enough money to eat healthy food and pay our rents," Current welfare rates are $585 a month for a single person, which is not enough to buy food for a previously healthy person, yet alone someone with special dietary needs.

The protest wound through the downtown, stopping at the offices of the provincial Liberals, who cut the special diet without warning. According to the OCAP website, it was to be a short stop to deliver an invoice “demanding full re-payment of benefits taken from people living on social assistance.” A banner was dropped from an office window and people spoke to the assembled crowd below.

Lenny Olin, was working as an interpreter for Ann Abbot, her employer, and was reading out Anne’s speech from the window when the crowd saw her dragged away by police. Ironically, the conclusion of the speech would have been a statement of solidarity with all prisoners.

The crowd chanted for the release of the prisoners, but to no avail. Several OCAP and allied labour activists, handcuffed, were loaded into a police van. One of those arrested was Ilian Burbano, a long-time community organizer with the Latin American Solidarity Network and the president of CUPE 3393.

Lenny and Anne however, were not loaded into the van.

“presumably because they didn’t have transportation that was wheelchair accessible.” Lenny said. “I guess in this case the ableist fucked up injustice system worked in our favour. However people with disabilities in general are drastically over-represented in prisons and other types of forcible confinement, such as government run institutions, nursing homes and accessible living facilities." Evoking the use of hospitals as prisons for disabled people, the police at first refused to arrest Ann but threatened to send Ann to a hospital as they were arresting her employee.

The arrestees were taken to 52 Division, where a small solidarity protest went on all afternoon as people from OCAP, the Latino community and their allies anxiously awaited news from inside. People were shocked to hear that the charges for some were mischief and forcible entry, which were hugely disproportionate to the actions taken. Previously, this sort of protest would have resulted in a trespassing ticket at worst. As Ali Mustafa, standing outside the prison, commented “They set a new precedent now, thanks to the G20.” These events demonstrate that increasingly aggressive policing continues, and that the policies of “g20 land” were not a state of exception but a continued policy.

OCAP is refusing to capitulate to police intimidation, and is calling for supporters to gather at bail hearings, which will take place July 22nd at 10:30, at college Park courthouse  (south-west corner of Yonge & College).