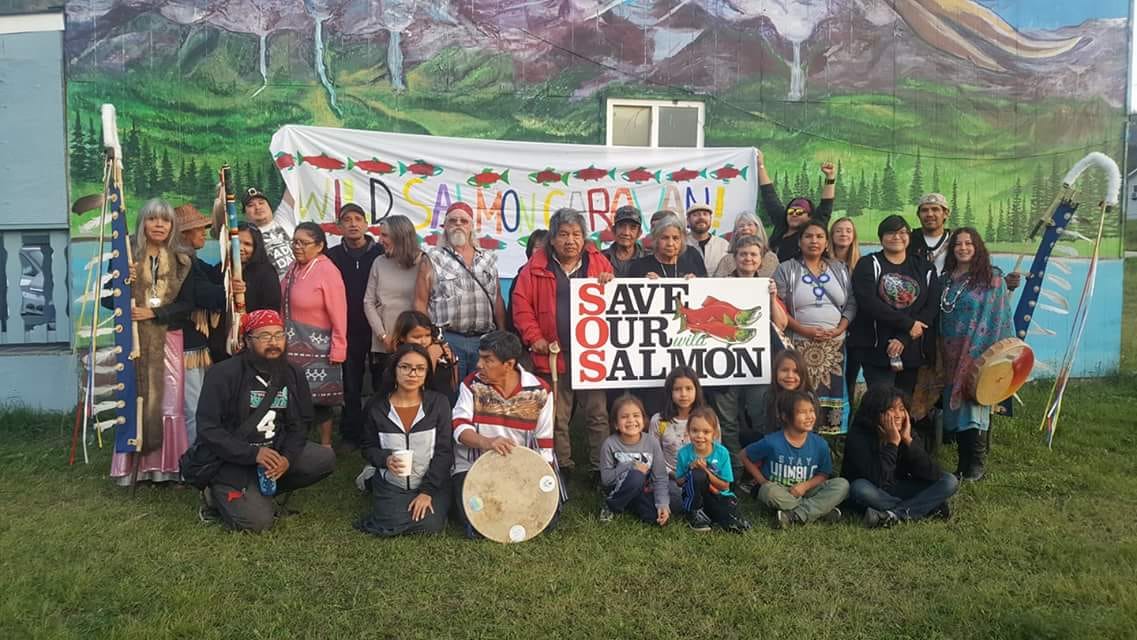 Whatever the Federal Liberal government’s decision come June 18 on the fate of the Trans-Mountain Pipeline Expansion, members of the unceded Nlaka’pamux and Secwepemc territories have made it abundantly clear that no pipeline will cross their lands.

“We oppose the Trans Mountain Expansion project and do not want it on our territory,” reads an open letter signed by the Nlaka’pamux Grassroots which was first posted to Facebook on June 10.

“We acknowledge and affirm as Nlaka'pamux people, our title and rights over our entire Nlaka’pamux territory and that this is upheld in many Canadian and pre-confederate laws including Section 35 of the Canadian Constitution.”

The June 18 date picked for the government’s expected final decision is actually well beyond the original May 22 deadline set by the National Energy Board back in February. The delay is in part due to the feds scrambling since last summer to meet a federal court’s demands for more marine life protection and for better consultations with Indigenous peoples.

So far, Natural Resources Minister Amarjeet Sohi has congratulated himself for allegedly personally speaking with 50 affected communities, and asserts that more than a 100 others have been visited by his consultation teams, according to a CBC News report. Since March of this year, Sohi claims the teams have held even more consultations.

Sohi recognizes that not everyone’s concerns may be resolved. But -- rather condescendingly -- he is assuming that by “being very transparent about why accommodation can't be offered," those affected will have no choice but to lay down and passively accept the contamination of their lands, the destruction of their food systems and the increased sexual violence that has been directly correlated to the man camps being built around the pipeline to temporarily house thousands of transient male workers.

By his own admission, Sohi’s circular reasoning suggests that the government deserves to pat itself on the back for passing a test created by itself.

"Our obligation is to ensure that we have adequately fulfilled our duty to consult,” he told the CBC. “And that's the test that we will apply to conclude these consultations."

But that so-called consultation process is precisely what the letter challenges, viewing it as simply part of the “entrenched government systems…that have been set up to remove” people from their ancestral lands and homes. By limiting consultation to mean targeted conversations with “Indian Band reserves” that the feds themselves established through the Indian Act, the feds are simply going through the motions to satisfy their “duty to consult” while actually ignoring many of the First Nations that oppose it.

“We also question what impact will the valid concerns that are being voiced at these consultation meetings really have on the final government decision on this project,” it reads.

In a conversation with The Media Co-op, Nlaka’pamux Grassroots member and one of the signatories Billie Pierre said the process is a classic divide-and-conquer scheme where “bodies that were created and funded by the Canadian government are….(upheld) as legitimate governments” while the concerns and protestations of band members themselves are ignored.

“The bands were offered financial compensation and a chunk of money if the pipeline route could cross the reserves…If we voted no, then the pipeline would be built around the reserves and if there was a spill… the corporation wouldn’t have an obligation to clean it up,” Pierre explained in a Facebook message.

“There was no consultation regarding the rest of our territory, and the bodies of water it is planned to cross and go under, or all the forests that would be cleared for it. The reality is, we have a say and full rights over our entire territories. For the Nlaka'pamux Nation, we've signed zero treaties, and have hunting and fishing grounds.”

Dawn Morrison of the neighbouring Secwepemc Nation is another signatory, as the pipeline’s route also crosses through hers and many other unceded Salish territories throughout B.C. Speaking with The Media Co-op, she described the tokenistic consultation process as “not meaningful, imposed and lacking mutual agreements,” and considered it as a mere spectacle put on to legitimize the pipeline by “selectively” addressing the band councils the government knew would go along.

As she sees it, the process is a “highly unethical” strategy of “systemic division” used by the government to put people at odds within their own communities and thus create “disharmony.” In this way, she said, the government bypasses the concerns of the “actual land title holders -- the traditional harvesters, the hunters, the fishers, the gatherers who are being impacted.”.

So “governments and corporations choose people who have somehow assimilated into…a capitalist economic value (system), and they silence the ones who disagree or who take more traditional, consistent values in our hunting, fishing, farming and gathering.”

The Cancer of Capitalism

Pierre also condemned the “dependency in rural communities…for resource extraction jobs” that colonial governments have cunningly created -- a desperate situation that leaves many Indigenous people with a very difficult choice to make.

“Being thrown some jobs and a chunk of change is all some people want,” she said. “They want to feed their families. In this capitalistic system that has made us poor some people think they can have these jobs and fish and hunt too. (But) if we want to keep hunting and fishing and drinking clean water, we have to stop that pipeline from being built.”

Like Pierre, Morrison also sees the capitalist pursuit of wealth through resource extraction as the cancer driving many of these economic, political and social ills affecting Indigenous peoples and territories. As founder and research curator of the Working Group on Indigenous Food Sovereignty, Morrison was therefore invited to the letter-drafting event to speak about the ways the Trans-mountain pipeline and resource extraction projects in general have impacted Indigenous food systems and sovereignty. Federal and provincial environmental assessments, as well as the process of the National Energy Board in approving the TMX expansion, and even the courts system, she said, fail to “assess the risk associated with…Indigenous food, cultural and spiritual values.”

Over the last 13 years with the Working Group on Indigenous Food Sovereingty, she has therefore worked at “decolonizing the food systems discourse” and to “make visible” a millenary, holistic Indigenous nutritional system that incorporates cultural and spiritual practices that are far too precious and complex for capitalistic commercialization and understanding.

Alongside a national museum and different health authorities, Morrison said she’s currently working on “decolonizing a methodology…to bring an indigenous narrative into food security” in the context of a “crumbling” capitalist economy.  The idea, she explained, is to provide Indigenous peoples with an alternative food and economic models that are “informed by our cultural values and not capitalism.”

“Even in the global food sovereignty movement,” she said, “our narrative is (still) invisible.”

The consequences of that social invisibility have been many and they have been dire, culminating in the physical and sexual violence that has particularly preyed on indigenous women and girls. Resource extraction projects like the TMX have arguably been one of the main neo-colonial tools used to perpetuate the cultural genocide begun in the 15th century.

Today, so-called man camps -- temporary housing facilities constructed for predominantly male workers on resource development projects -- have become modern hunting grounds for predators. “Reports show a direct correlation between these encampments and violence against women,” according to the Secwepemcul’ecw Assembly website, which provides links to many of the studies.

“Wherever man camps are set up, we face exponential increases in sexual violence,” the website states. “As development results in the destruction of our land base and our food sovereignty, it also drives up food and housing prices. This further intensifies our economic insecurity and we are forced into even more vulnerable conditions.

“As James Anaya, the former United Nations Special Rapporteur on the Rights of Indigenous Peoples, has noted ‘indigenous women have reported that the influx of workers into indigenous communities as a result of extractive projects also led to increased incidents of sexual harassment and violence, including rape and assault.’”

So far, more than 3,300 organizations and individuals including high-profile celebrities have signed the Secwepemcul’ecw Assembly’s Women’s Declaration Against Kinder Morgan Man Camps.

Yet, environmental assessments of resource projects in Canada have consistently failed to consider any of this. In fact, in May, outspoken land defender Kanahus Manuel of the Secwepemc Nation posted a video documenting the ongoing construction of an illegal man camp at Valemount, B.C. despite a federal court of appeal decision ordering it to stop.

Manuel is a member of the Tiny House Warriors, a collective of Indigenous activists that have constructed small homes along the pipeline’s route -- their unceded ancestral territory -- in defiant opposition to it. In the video, a fenced-in construction site can be seen as well as construction vehicles, which Manuel says are evidence of the “illegal construction…happening in Secwepemc territory.”

In such remote communities, man camps have become a breeding-ground for “human-trafficking,” “serial killers” and “serial rapists,” she says in the video. Teenage boys and girls as young as eight years old escaping these hunting grounds have been some of the victims reported. “These are the sicknesses that plague these man camps,” she says on camera.

According to Manuel’s video report, none of the residents of Valemount knew of the man camp being built, which could house up to 1,000 men. Social workers weren’t informed either and were “scrambling” after hearing of it and knowing that not a single rape kit could even be found in the town, according to her.

“These are fathers that are concerned about their daughters’ safety,” she says. “They are scared…. They are threatened…. This is just sick and disgusting.”

Morrison sees this as the logical conclusion of a colonial project with the goal of cultural genocide, and modernly expressed through the resource extraction industry. Couched-in by institutionalized, “systemic racism,” and propped up by divisive tactics like sham consultation processes, she said, the “social risks” that come with resource extraction are something governments and corporations willfully ignore.

“So there are all these kinds of risks that the system does not assess,” she said, “and the people that sign these agreements are not educated or able to articulate or even critically (challenge it).”

Ultimately, Morrison said, division and disharmony within Indigenous communities is what colonial government and corporations try to foster and exploit.

So while there are “intra-tribal issues” which communities themselves must responsibly address, Morrison said the goal should always be unification, solidarity and mobilization, particularly among the grassroots, “because the band councils aren’t saying any of this.”

“It is systemic division,” she said. ““So it’s really important that we start to fight these issues directly….There will never be meaningful truth and reconciliation within the same parameter, within the same system that was designed to divide us. So I put it back on the government and the corporations, and I call on them to act in a socially responsible way for the disharmony they create.”