Algonquin Elders speak out against tourist show at sacred site on unceded land in Ottawa
by
Dr. Julie Comber
This post has not been approved by Media Co-op editors! 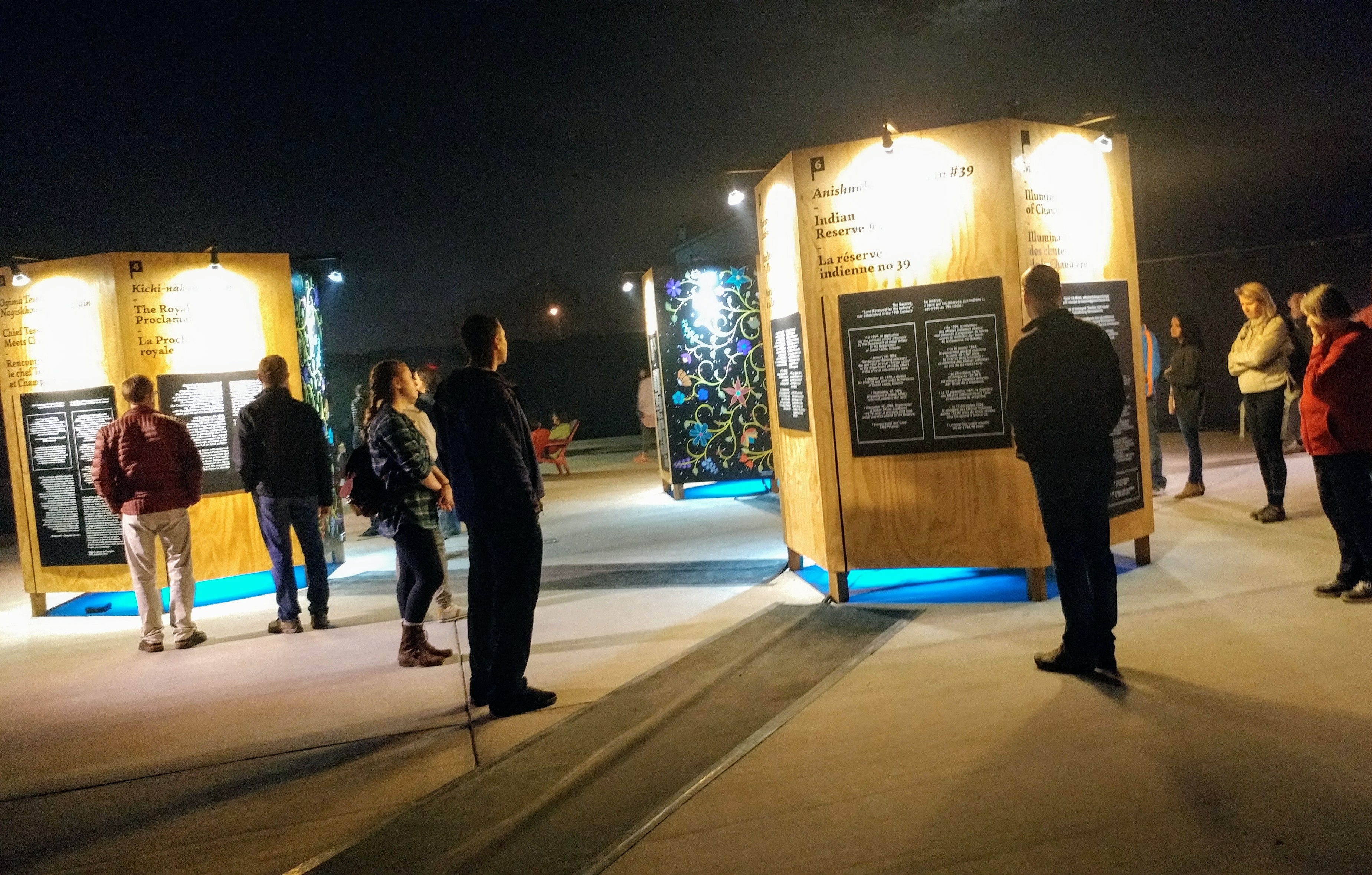 For the first time in over a century, the public has access to view the Chaudière Falls in Ottawa, unceded Algonquin territory. Energy Ottawa, a subsidiary of Hydro Ottawa, constructed a new public space overlooking the falls, part of its Chaudière Falls expansion project. A lavish light and sound show called Mìwàte, part of the Canada 150 celebrations, is kicking off the new public viewing area from October 6th to November 5th.

But Chaudière Falls and the nearby islands are sacred to Algonquins and many other indigenous peoples on Turtle Island (North America). While organizers of the show claim the word “Mìwàte” means “dazzled by a light or fire” in Algonquin, many Algonquins are not dazzled, and object to the show taking place at their sacred site, Akikodjiwan.

UPDATE (11:53 pm EST, Oct 13): A Tribe Called Red has pulled their music from Mìwàte because the show on sacred site Akikodjiwan is part of Canada 150 celebrations.

In the waiting area of the show, there is an Algonquin Awareness Exhibit. “This special exhibit is presented by the Algonquins of Pikwàkanagàn,” states the Ottawa 2017 website. In the exhibit are panels with information about the show and about Indigenous peoples. There are panels about residential schools, about Algonquin petitions to the government for their land, and about the community of Pikwàkanagàn. But there is no panel about the sacred site itself.

Akikodjiwan is the name of the sacred site in Algonquin, and it includes Chaudière Falls as well as the islands downstream (Albert, Chaudière, and Victoria). Since time immemorial, before Europeans arrived, countless generations of Indigenous peoples offered tobacco to the majestic falls, and conducted their ceremonies on the islands.

Also missing from the panels is the history of Indigenous peoples being pushed away from their sacred site when Ottawa was settled. A ring dam that imprisons the falls was built in 1910 to generate hydroelectric power. The islands and water became polluted by industrial use, including paper mills and power stations. When the industrial desecration ended in 2007, there was an opportunity to heal the land and waters and return Akikodjiwan to its sacred purpose.

To this end, the late Grandfather William Commanda, a revered elder and former chief of Kitigan Zibi Anishinabeg, petitioned and prayed for his Asinabka Vision for 30 years. His inspiring Asinabka Vision intended to heal the land and waters and re-establish Chaudière falls and nearby islands as a sacred site. His Vision included freeing the Chaudière falls from the ring dam, decontaminating and re-naturalizing the islands, and building an indigenous centre designed by renowned architect Douglas Cardinal.

Elder Evelyn Commanda-Dewache, William Commanda’s daughter, explains that the Asinabka Vision would create a healing place that “would benefit all peoples, not only Algonquins,” and that her father founded the Circle of All Nations organization to promote a culture of peace and cooperation.

Recently, other Algonquin communities have articulated a vision for Akikodjiwan. In 2015 the Assembly of the First Nations of Quebec and Labrador (AFNQL) passed a resolution brought forward by nine Algonquin chiefs to protect Akikodjiwan. The resolution cited articles 11 and 12 of the United Nations Declaration on the Rights of Indigenous Peoples, which Canada has since agreed to adopt and implement. The AFNQL resolution demands that no development occur at Akikodjiwan until there is free, prior, and informed consent from the Algonquin Nation as a whole, and calls for the federal, provincial, and municipal governments to enter into discussions with the Algonquin chiefs and councils about the establishment of an Algonquin Nation Cultural Park and Historic Commemoration Site at Akikodjiwan.

Disapproval of the Mìwàte Show

Although publicity for Mìwàte asserts that the show was developed “in collaboration with the Algonquins of Pikwàkanagàn, and in consultation with representatives from local Métis and Inuit communities,” Pikwàkanagàn is only one of ten federally recognized Algonquin communities, and many Algonquins live off-reserve. What about the voices of many other Algonquins and other Indigenous people who disapprove of the show?

Elder Commanda-Dewache said, “I would not want to put anything artificial around the falls. It is laughing at the spirit. If you want to see pretty colours, you will see those colours yourself without putting electricity there. It is like a meditation. When the sun hits the water, you can see colours. That is spirit.” Similarly, Dr. Gehl notes, “the moon illuminates the water. Why do we need these lights?”

Elder Albert Dumont has been an outspoken advocate for Akikodjiwan. For him, the show is a mockery of indigenous spiritual beliefs and culture. “It is like people are prepared to present [Akikodjiwan] as a sideshow, when it should be honoured and respected for its sacredness. These sacred places are gifts from Creator. They are not a show of any kind.” Echoing this, Commanda-Dewache states, “we are not a showcase here.”

Douglas Cardinal adds, “the whole thing is so disturbing, not only to Algonquins, but for all Anishinaabe people from the Atlantic to the Rockies. It’s not a play thing for the entertainment of the dominant culture. It’s a sacred site. If they did a light show at Saint Peter's square, ask the Pope what he would think.”

Dr. Gehl also points out the dishonesty of the show claiming to illuminate the falls when it actually illuminates the overflow of a dam. Indeed, Ottawa 2017 director Guy Laflamme claims viewers will “almost forget there is a dam,” and the lights only illuminate parts of the falls in front of the dam.

Elder Jane Chartrand scoffs that “they are trying to dazzle the public with brilliance, and baffle them with bullshit.” Rather than celebrating indigenous spirituality, those interviewed think the light show obscures the truth that a dam desecrates the sacred falls. And that the dam could be removed.

Consultation? What About Permission?

The exhibit at Mìwàte claims consultation and collaboration. But none of the respected Algonquin Elders I interviewed were consulted, despite the show taking place at this most sacred place on unceded Algonquin territory. Commanda-Dewache asks, “When they say they talked to Algonquins, did they talk to 20? That does not mean all of us.”

“I know that whenever they put out feelers about stuff like this,” Dumont observes, “they know who will accommodate them. They know who to approach, and they consult with them. They don’t consult with people like me. And that’s not real consultation.”

Cardinal quips, “What if they came into your backyard and consulted your neighbours about it?”

Dr. Gehl emphasizes that for any consultation about Akikodjiwan, “Pikwàkanagàn doesn’t represent all Algonquins. They need to stop saying, ‘we consulted with Pikwàkanagàn.’” And she cautions that the consultation process can be corrupted. “Follow the money. This is just manufacturing consent.”

All those interviewed for this article think consultation about activities or development at Akikodjiwan is not sufficient. They stress that permission – clear consent – should have been obtained for Mìwàte. “I think definitely this required permission,” says Dumont, “and it should have been sought from people recognized as elders in their communities.” Chartrand adds that there also needs to be transparency about the identity of elders who are asked for permission for activities at a sacred site.

Opportunity to Halt Development at Akikodjiwan?

While disapproving of the Mìwàte show itself, those interviewed for this article hold hope that the attention generated by the show might inspire people to protect Akikodjiwan from further development, and to restore the falls and islands to their sacred splendour.

Luc-Anne Salm and Benjamin Ramirez, members of Freeing Chaudière Falls and Its Islands (AKA “Free the Falls”), have been distributing pamphlets about the sacred site to people waiting in line to see the show. They feel people going to the show care about the area and are not just there to be entertained. “The people in line are hungry for information about the sacred site,” says Salm.

Cardinal believes that, “life is all good, not good and bad. This show is a crooked good. A crooked good that just needs to be straightened out. And it’s a good teacher. It teaches you how not to behave!”

Dumont sincerely hopes people will join the efforts to save Akikodjiwan. For those considering attending the show his recommendation is that, “If you are going, have a meditation before you go. Sit quietly in your healing place. Find it in your heart to hear the message of this sacred place.”

Elder Chartrand also sees this as an opportunity: “I'm issuing a call out to all Anishinaabe people to come together to protect the sacredness of Akikodjiwan. Wherever you are from, make your voice heard. We all have a voice. If only one person is talking, no one listens. Let us join together and raise our sacred consciousness to uphold and protect Akikodijwan.“

Dr. Julie Comber is a settler-ally of Scottish and English ancestry, living in Ottawa on unceded Algonquin territory. She met Grandfather Commanda in 2010 when she was working to protect another sacred area in Ottawa, the South March Highlands. She has been a member of Freeing Chaudière Falls and its Islands (AKA “Free the Falls”) since 2014. In 2015 she produced the Reconciliation River music video, and in 2017 helped organize the Faith is Peace sacred walk for Akikodjiwan. She is a mother, auntie, freelance writer, researcher, and “artivist” (artsy-activist).