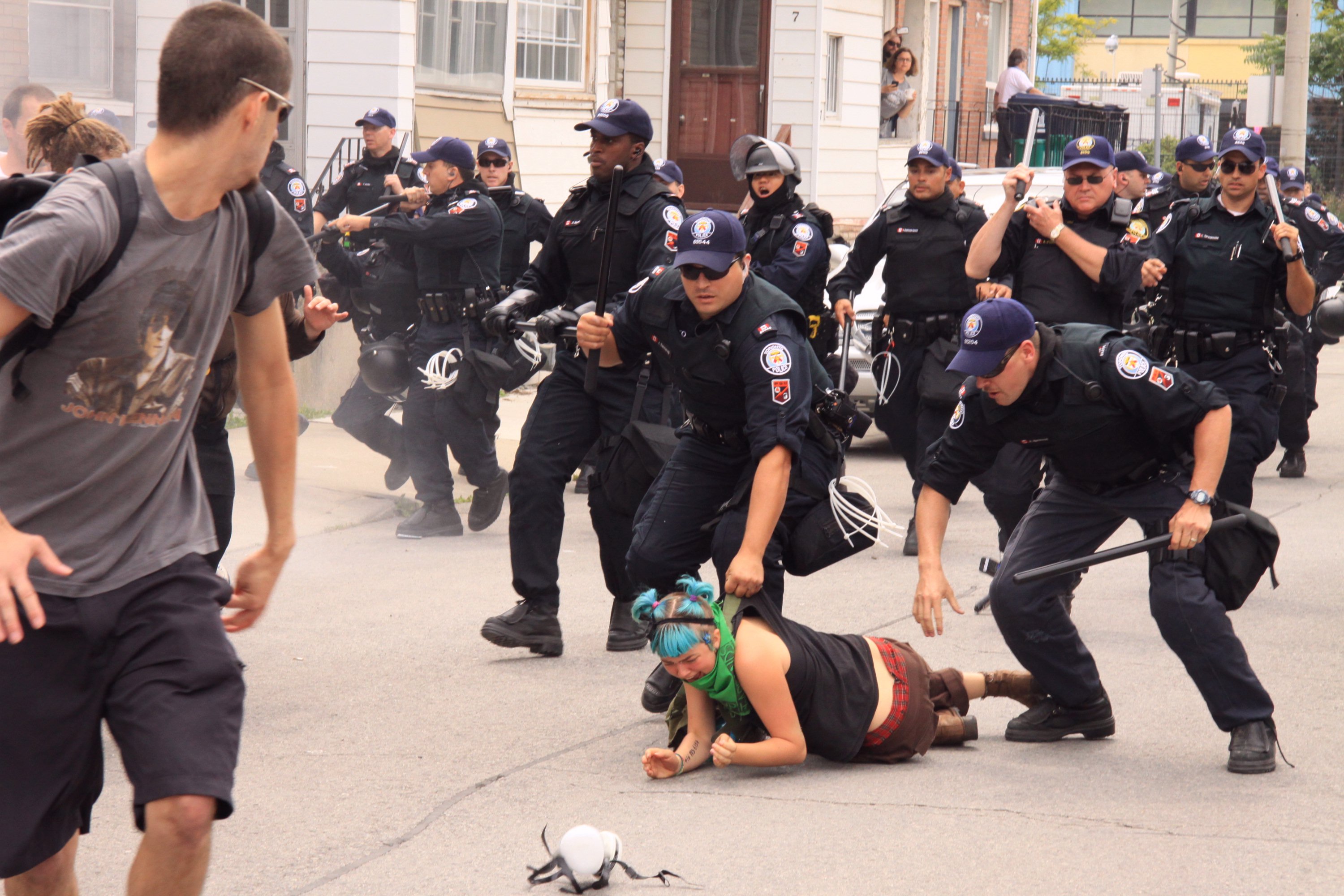 I gave this speech at the 'Reclaim Your Rights' rally on Saturday, July 17th.

A few minor changes have been made since then.

Hey everyone, my name is Nat Gray. I’d like to start by acknowledging that we are gathered here today on unceded occupied Coast Salish Territory.â€¨â€¨

At the end of June, I went to Toronto to exercise my civil rights and march in active opposition to the G8 and G20 meetings being held there. On Sunday June 27th, I attended a jail solidarity protest that was peaceful. Without warning a line of riot police started moving towards us, and while running away, I was shot twice with rubber bullets, then arrested and incarcerated for 30 hours. I have been charged with obstruction of a peace officer. I have never been more terrified, more dehumanized or more in pain than I was that day. I wish my story were unique.

Over one billion dollars of tax payer's money funded the weekend's tragedy, which was executed by 20,000 police officers and their artillery. Over one thousand demonstrators, media and passersby were indiscriminately incarcerated and subjected to abuses similar and in many cases worse than what I experienced. As demonstrators, we were in the streets to resist the systemic and violent oppression of people here at home and around the world caused by the capitalist, corporate strategies solidified, agreed upon and celebrated by the leaders at the G8 and G20 summits. We got a brief taste this weekend of the very human rights abuses we were there to oppose. Here's my story.

â€¨I was at the jail solidarity rally on Sunday June 27th, outside of the detention centre in support of my friends who had been surrounded and arrested in Queen’s Park, the designated protest zone, the day before. Sunday's protest followed the route decided upon by the police, and was proceeding peacefully. A line of riot police formed between us and the detention centre. Without warning, two unmarked minivans screeched to a stop behind the police line. A number of plainclothes men stormed through the line and into the crowd, violently pushing two people into the ground. The people were dragged along the pavement and aggressively thrown into the vans and the vans took off. To all who were there, this appeared to be a strategically orchestrated kidnapping. The small woman who was snatched later became my cellmate. She told me of being choked and sat on by two large men to the verge of unconsciousness. A third man pulled her hair and all three verbally abused her, referring to her as ‘cunt’, ‘bitch’, ‘whore’, and ‘street trash’ on the way to the detention centre. All three refused to identify themselves.â€¨

At this point we decided to de-escalate the situation by sitting down. We chanted ‘we are peaceful, how about you’ and clapped our hands. During this time, officers donning helmets, body armour, gas masks, and weapons resembling tear gas guns filled in the line in front of us. Several minutes later, once again without warning, the police line started moving quickly toward us. We stood up and moved backwards, complying with the yells of the officers to get back. Soon thereafter, the riot line parted to let an officer through who was wielding a large, intimidating weapon.

As an asthmatic, I had bought a painter’s respirator from a hardware store to cover my face in case chemical weapons were used during the weekend. I had no idea what the weapon behind us was, so as a precaution, I reached into my bag, took out the mask and put it over my face. Not wanting to have my back to the weapon, I turned to face it while retreating. It was then that I was shot in the sternum. As I went to turn, I was shot again in the elbow, and I immediately hit the ground, falling into the fetal position. I remember simply hoping that someone was on their way to help me, and I knew I couldn't get up by myself.

A person ran back for me and attempted to help me to my feet, but on my way up, the riot line caught up to us and several police shoved me face first into the pavement. They yelled at me to stop resisting and kneeled on top of me. I was terrified, and lost control of my bladder. All I remember was begging them to be gentle because I was hurt. They then dragged me to my feet and walked me to a nearby cruiser, the officer on my left insisting on gripping my arm over the bullet wound.

The first half-hour of my incarceration was spent lying in the fetal position in the cruiser, and being dragged to various places within the compound. They didn't seem to know what to do with me, and I repeatedly asked every officer I saw for medical attention. The first time I was dragged out, they brought me over to a sergeant, and told him I was asking to see a doctor. He said ‘too bad’. I then repeated my request, and was told by the sergeant to ‘suck it up’. Approximately thirty minutes after my arrest, I finally had my vitals checked, and was given acetaminophen. All the detention centre doctors had to offer was acetaminophen or ibuprofen. I was then put on a stretcher in an ambulance. This was when I overheard officers confirming why I had been targeted. It was because I had put the respirator on my face.

It was one hour later that I arrived at the hospital, and was checked for internal bleeding and broken bones. Thankfully I suffered from neither; an hour and a half of internal bleeding could’ve left me dead. I was then brought back to the detention centre, and upon arrival, put in a solitary cell. The detention centre was a series of metal cages in several large, cold, concrete rooms. The solitary cells were in a row against one wall against one wall in the second room, with sheet metal blocking the view on three sides. I was soon brought into a makeshift office and interrogated by three male officers. One of them referred to me as 'sir' immediately after I told him my name, and asked if I preferred to be called 'Natalie' or 'Gray', implying that my physical appearance didn't represent my sex.

Every prisoner I've spoken to experienced some type of verbal abuse at the hands of officers. Based on appearance, the officers categorized and harassed people according to race, gender, sexual orientation, physical capability, gender identity, presumed income and whatever else came to their minds. A person in a cell next to mine was told to 'stop crying, faggot'. A racialized person was told 'we let you into this country and this is what you do?'.  A woman was told she was going to be repeatedly raped while she was in jail. The scope and consistency of the verbal abuse in the detention centre is difficult to articulate.

Afterwards, the officers escorted me back to my cell, sporadically moving me to different ones throughout the course of my incarceration. I knew that four hours after my hospital visit, the acetaminophen would wear off and I'd be in severe pain again. So I started asking officers if I'd be treated. I also needed to take my asthma medication. An hour and a half after I started asking to see the physician, I was finally brought to one. Throughout my stay, I would tell the officers my pain medication was about to wear off about twenty minutes in advance. They would wait until I was hunched over, shaking, clutching my arm to my front and crying before bringing me to the physician. I remember hearing a woman asking to see the doctor, and the officers told her to stand up. She told them that she couldn't, that she was too injured to do so. They told her if she couldn't stand up, she couldn't see the doctor, and left her in her cell.

We were occasionally given buns of white bread with a slice of processed cheese in the middle to eat and small styrofoam cups of water to drink . The bathrooms were outhouses without doors that faced the officers. The solitary cells didn't have bathrooms. The floors and benches were concrete, and puddles were common. The officers refused us blankets and warm clothing. I was refused a fresh pair of pants, and spent all 30 hours in the pants I had urinated in. There were fluorescent lights on 24/7. I huddled up in a corner of the cage, and dozed off for a couple minutes around midnight. But I was too hungry, cold and injured to sleep that night, like many other prisoners. I continued throughout the night to try and see the doctor every four hours.

The next morning, I was put in a paddy wagon with several other people and driven to the courthouse. One of them was a black man. He told me that he had been walking through Queen's Park when a police officer called him over. He was then surrounded and beaten by fifteen officers. They kicked him and stomped on his face. When he put his hands over his face, they yelled at him to 'stop resisting'. His jaw had been broken and several of his ribs were cracked. He had been charged with resisting arrest.

I was among the lucky people that were released on bail Monday. My bail was $1000 with a number of conditions. It felt weird to leave my cellmates behind, but they reassured me and hugged me and gave me their family's phone numbers to call from the outside. Most people had been denied their rights to a phone call. I stepped out into the sun and immediately burst into tears. I sat on the ground outside the courthouse with some wonderful people who had brought real food and medical supplies for the people getting out. While I was waiting for my friends to get there, ten police officers surrounded six of us and told us to get off the property. They followed us onto the sidewalk and harassed us until we were well away from the area. I was given a ride to my friend's place where I was staying. As part of my conditions, I was restricted to that apartment and spent a week in there, constantly in fear of a knock at the door and being taken back into police custody.

While most of the 1,000 arrestees have been released, 12 people remain incarcerated. These individuals have been charged with conspiracy, with bails set upwards of $85,000. These political prisoners have been strategically targeted in an attempt to discredit and undermine our grassroots organizations. These people are our friends and our comrades. he systemic brutality and torture that 1,000 human beings were subjected to that weekend leaves no question of who the real criminals are.

Stephen Harper, Dalton McGuinty and Bill Blair are criminals, and they made one big mistake.

We are hurt. We are sad. We are angry.

We are also as passionate, as capable, and as determined as ever before.

This tragedy has enraged us, inspired us, united us.

We stand to demand answers and hold the criminals responsible.

We stand here to insist on the rights of every human being in this nation.

But we cannot forget those elsewhere. We must insist on our right to flood the streets in solidarity with those around the world whose day-to-day survival is resistance. Whose struggle for clean water, clean air, clean land, self-determination and peace is their way of life. Whose tragedies are a direct result of the illegitimate, criminal choices made by Stephen Harper and the rest of the G8 and G20 thugs. Those whose activism deserves global solidarity.

Our so-called leaders have no idea what they've gotten themselves into.