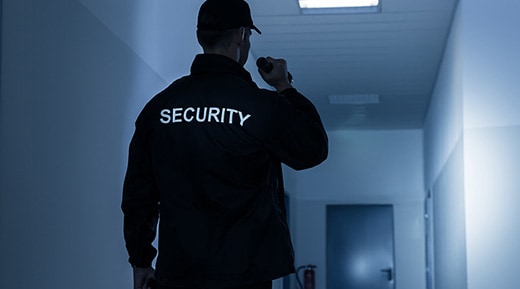 All policing is founded and organized for defense of private property and securing conditions for capital accumulation. Like formal policing, private policing disproportionately targets people on assumption of class and on racist bases. While this is sometimes forgotten in terms of formal state police forces, it is inescapable in private policing, which is directly employed by property owners and managers. Private security is deployed to target, harass, and remove people on assumptions of poverty or housing status. One has only to walk around in public to witness private police aggression toward people on the basis of class and/or racialization. Black and Indigenous people know full well the experiences of store floor walkers and security targeting them simply for being there -- the criminalization of “shopping while Black or Indigenous.” And all of this, like formal policing, includes the lethal deployment of violence.

While data are not systematically documented or reported publicly on private police interactions, self-reports and available media reports tell a story. And more often than might be acknowledged, that story is one of lethal force in the interests of property and profit.

Killings by Private Security in Canada

On May 28, 2020, a man died while in custody of RCMP in Richmond, BC, (Metro Vancouver) after being attacked and subdued by private security. According to the Independent Investigations Office (IIO), the provincial police oversight agency, RCMP officers responded to reports of shoplifting at a business in Richmond. Upon arrival, a security guard was struggling with the man. The victim was placed in handcuffs before police addressed the fact that he was in medical distress. Emergency responders were called and transported the man to hospital where he was pronounced dead.

On September 30, 2020, a 31-year-old man, later identified as Howard Glen Hill, was critically injured in “an altercation” with security guard Jack Cruthers Hutchison at Trinity Western University. He died in hospital several days later. RCMP were called to the campus in Langley, British Columbia, on reports of the altercation and found Hill unresponsive. Hutchison was charged with manslaughter in Hill's killing on December 22, 2020 -- a rarity, particularly when formal police officers kill.

Manslaughter charges have also been brought in two of the most notorious, and publicized, cases of killings by security guards in Canada. Those are the cases of guards Sheldon Bentley in Edmonton in 2016 and Amanda Rojas-Silva and Shane Hutley in Toronto in 2020.

The Killing and Robbery of Donald Doucette by Sheldon Bentley

Edmonton security guard Sheldon Russell Bentley was charged with manslaughter and robbery for kicking a fifty-one-year-old Edmonton man, Donald Doucette, to death and then robbing him of $20. Doucette, a culinary chef, was found in an alley next to the Lucky 97 grocery store in the afternoon of July 31, 2016. An autopsy showed Doucette died of blunt abdominal trauma.

Doucette had apparently passed out in the alley before being approached by two security guards, one of whom was Sheldon Bentley. The charges claim Bentley kicked the passed-out victim and stole $20 from him. The guards then simply went back to work.

Donald Doucette had reportedly been struggling with alcohol for some time, a problem that family members say began in response to the death of his father. He had been going to Alcoholics Anonymous as well as starting a drug and alcohol rehabilitation program. In addition, Doucette struggled with epilepsy. His family often worried that that he would fall down and have a seizure in a non-supportive environment. Police, of any type, are that environment—by definition

The Killing of Danielle Warriner at Toronto General Hospital

On May 11, 2020, security guards Amanda Rojas-Silva and Shane Hutley had a “physical interaction” with 43-year-old Danielle Stephanie Warriner, a patient at Toronto General Hospital during which Warriner went into medical distress. She died in hospital 16 days later. The security guards were subsequently charged with manslaughter and criminal negligence causing death

The coroner’s report is chilling. It found that Warriner had simply been “sitting calmly” in the lobby at Toronto General Hospital when the two guards approached her and inexplicably “forcefully” restrained her. The report also revealed that a security camera was “purposely turned away” for over two minutes as the guards continued to assault Warriner. It has further come out that the guards were in no way authorized to physically engage with patients without first telling them they were under arrest. No such authorization was ever given or received with regard to Danielle Warriner.

The coroner identified that Warriner had been diagnosed with bipolar disorder, suffered from chronic obstructive pulmonary disease (COPD) related to smoking, and dealt with substance use issues. She had been living in a shelter when she was diagnosed with COVID-19, which led to multiple hospitalizations. According to the coroner’s report, she had returned to hospital the day before her death, suffering from a cough and shortness of breath, and struggling with confusion.

On the day she was killed she had merely left the emergency department to get a bite to eat. According to the coroner’s report she was sitting “calmly” in the lobby. At 6:38 AM she was approached by several security guards. One confronted her “from up close,” engaging in a shouting match.

The report describes, based on video evidence, guard Rojas-Silva forcefully lifting Warriner out of the chair “before walking her a few feet over and forcing her face first with a lot of strength against a wall.” At this point a second security guard, Hutley, entered the fray with all three ending up on the floor. The report notes that what occurred over the next two and a half minutes was not recorded on video as another security guard “purposely turned away” the camera. When the video picks up again, Danielle Warriner is being pushed into a service elevator, slumped over in a wheelchair.

The coroner’s report concluded that Danielle Warriner died from a brain injury resulting from a lack of oxygen which was “due to restraint asphyxia following struggle and exertion.” The pressure on her chest while she was forced face down on the floor was cited.

The hospital did not contact Danielle Warriner’s family for 11 days.

More and more policing functions are carried out by private forces, especially security guard services. Like state policing forces, their members kill. Yet private security is largely unregulated in Canada and security guards have a great deal of leeway to act in unaccountable and largely unreported ways. Such services exist only to protect private property and profits. They have no special mandate to act in public space.

When I was active with the Ontario Coalition Against Poverty (OCAP) we would occasionally follow private security around Sherbourne and Dundas in Toronto to impede their efforts to harass and intimidate residents, especially unhoused and racialized people. As much of urban space is policed on an intensive basis by private security as part of layered policing programs (security are often connected directly to cops), this can be an aspect of public safety for those targeted by property owners, businesses, and government bureaucrats.