by
People's Strike
This post has not been approved by Media Co-op editors! 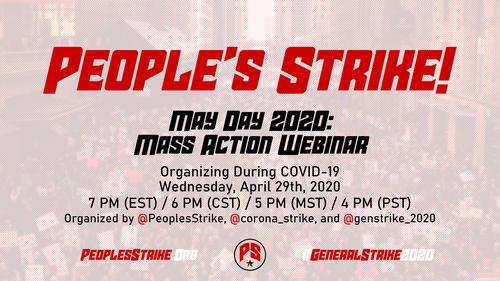 Later today, an orientation webinar featuring frontline organizers from across the US will introduce the upcoming MayDay2020 actions of May 1st and movement Towards A General Strike based on the People’s Strike call.

Background and info on May Day 2020 / People’s Strike:On April 1st, Cooperation Jackson, a network of democratically-managed, worker-owned cooperatives in Jackson Mississippi, issued a call to action in direct response to the governmental and economic abuses of the people, revealed by the Coronavirus pandemic. Globally, future priorities must center on saving lives, not profits. Returning to work under this pandemic is a threat to our collective health and safety. The people need transformed, not reformed systems of social support. With food and supply shortages running low throughout the United States, it is now clear, the capitalist system cannot resolve this or any humanitarian crisis.

“We say ENOUGH! It is time to stand up! It’s time to strike back – for our lives and our futures!” – Kali Akuno, co-founder and co-director of Cooperation Jackson

We have an opportunity to take control now, and we are ready to fight for a society in which all people can live with full autonomy without having to worry about survival.

People from around the U.S. and the world heard the demands and began immediately collaborating, building the solidarity and power necessary to make this vision a reality.

Among the first groups to take up the call were the Black Socialists of America, CoronaStrike, Jobs for Justice, No New Jails NYC, Occupy Wall Street, Social Service Workers Uprising Now, Planning Beyond Capitalism, Moms 4 Housing, and Progressive Action with more joining daily.

In addition to members of these organizations, workers and tenants across the United States are rent striking, conducting wildcat work stoppages, protesting through vehicle caravans to demand decarceration from jails, prisons, and ICE detention centers.

“Workers of the world unite! Join us as we build a United Front to build power and fight Capitalism during this political moment.” – Joshua Dedmond, National Organizer at US Labor Against the War