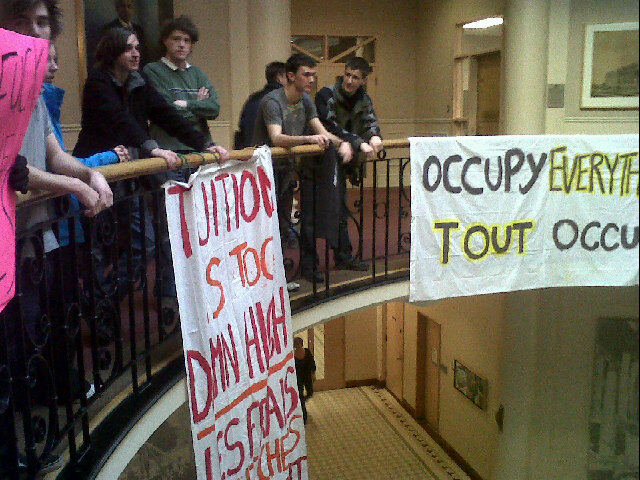 We, the students, recognize that this vote is simply reflective of the progressing neoliberal agenda towards education being felt across the world.  This office occupation and rally against tuition fee increases was also in solidarity with fellow students in the United Kingdom, who are participating in a National Day of Action for Education, students across Italy who are currently occupying their universities, and students in New Brunswick who are taking to the streets today as well.

As demonstrated at the Townhall on Tuition Fees last week, students across the board are demanding that post-secondary education become more accessible. It is both disgraceful and inappropriate that our administration could hold such a townhall, and yet disregard all input received from us, the students, who will now will suffer the consequences of further inaccessible education. As demonstrated by the already increasingly over-used and straining services of the uOttawa Food Bank, student poverty is increasing. Yet, the Board of Governors has hiked our tuition fees once again, leaving us wondering: did we ever have a chance, or was the decision made without a second thought?

The group occupying the administrative office has the following demands:

The action today was set out in retaliation to the lack of responsiveness within the University of Ottawa’s administration. Over the last few years, campaigns such as ‘Drop Fees’ and ‘Education is a Right’ have emerged in an attempt to change the flawed system and freeze tuition fees for the benefit of students, who should be the University’s first priority.
Yet, such campaigns and all their requests have been ignored time and time again. The occupation and rallies today show that students will not back down, be ignored or be silenced. We will continue the fight for accessible post-secondary education until we win!
The students, united, will never be defeated!!!