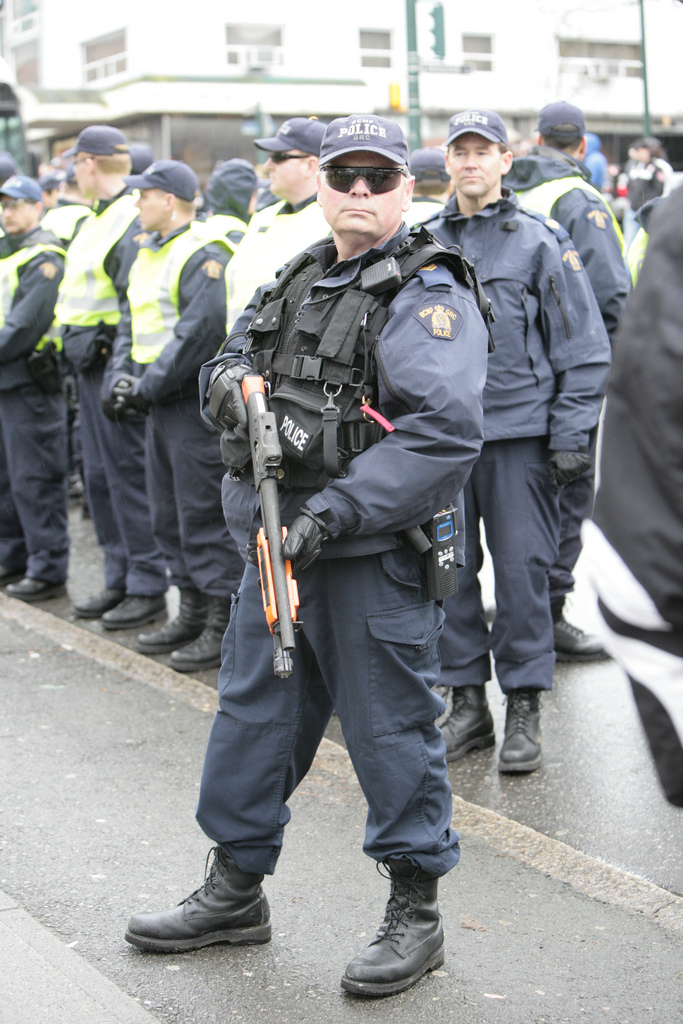 RCMP were responsible for three deaths. This includes two at the hands of RCMP in Campbell River and one in Saskatchewan at Cumberland House Cree Nation. Winnipeg Police Service (WPS) officers killed two people. Sûreté du Québec (SQ) officers were involved in two deaths. Saanich police and Greater Victoria Emergency Response Team (GVERT) were both involved in an operation that killed two people.

Six people were shot and killed by police in June. Two people died in police custody and two died in a police vehicular chase. One person was killed in a physical struggle.

As always, these numbers represent an undercount. There is no formal system of reporting police killings that is shared across departments or provinces so we can only say that at least this many lives have been taken by police.

Additional officers were called to the scene, including a SWAT team. The house was surrounded by police and three people surrendered.

RCMP claim that an exchange of gunfire followed with people still in the house. Police later entered and found a man inside who had been injured. He was transported to hospital by ambulance and died there. Reports also say another person was injured.

Campbell River RCMP shot and killed a man at the Discovery Harbour marina in the early morning of June 13. The Independent Investigations Office (IIO) of BC report that RCMP claim they received a report of a homicide at the marina and that hostages were being held at the scene around 1:45 AM. Campbell River RCMP, crisis negotiators, and members of the Vancouver Island Emergency Response Team reportedly responded to the call.

Upon arrival, RCMP confirmed that the alleged hostages were safe and no longer at the scene. Police claim they spoke with a man believed to be the person about whom the initial call was made. At some point during this interaction police shot and killed the man. He was pronounced dead at the scene.

This was at least the second person shot and killed by Campbell River RCMP so far in 2022.

Winnipeg police shot and killed a man in the city’s North End on June 17. The Independent Investigation Unit of Manitoba (IIU) is examining the killing. It is reported that police shot the man at the intersection of Salter Street and Mountain Avenue at around 4:15 PM. He was taken to hospital where he died.

A 32 -year-old man died on the way to hospital following his arrest by Saskatoon police on June 18. Police claim they responded to several calls early that morning, claiming a man with a butcher knife and a bottle of alcohol was screaming that people were trying to kill him. They claim that when officers arrived, the man fled on foot and was found shortly thereafter with his face covered in blood.

Officers believed he was under the influence of an intoxicant and struggled with him while arresting him. He allegedly became unresponsive when the ambulance arrived.

A man experiencing crisis was killed during an arrest by Winnipeg police in which a taser was deployed against the victim on June 23. The IIU reports that the incident occurred on Henrietta Avenue in Winnipeg at around 12:30 AM. According to the IIU, Winnipeg Police Service officers responded to a call from the Crisis Response Centre regarding a man’s wellbeing. Officers claim that on arrival they located a man with a knife. During their interaction with the man, police claim he suffered a self-inflicted knife wound. Police responded to this not by assisting the man but by tasering him. The man was restrained and transported to Health Sciences Centre where he was pronounced dead.

None of the police claims have been confirmed publicly. The nature of police actions with the man, including during the time he sustained the knife wound, have not been explained publicly.

Police are not appropriate responses when people are in crisis. When someone reaches out for assistance, they should receive compassionate care not police violence.

A man died after going into medical distress while in RCMP custody in Campbell River, BC. It is reported that the man was arrested at approximately 10:45 AM for a breach of probation and was detained at the Campbell River detachment.

An on-duty guard found the man unresponsive and in medical distress at around 11 PM. The man was transported to hospital and died there.

This was the third person killed by Campbell River RCMP this year and fourth in under a year. They shot and killed Jared Lowndes, a Wet’suwet’en man, on July 8, 2021.

Longueuil police (SPAL) killed a 41-year-old man on the evening of June 26, 2022. Quebec’s independent bureau of investigations (BEI) is examining the killing. They report that police responded to a call regarding two men fighting with sticks at around 11:35 PM in the parking lot of a commercial building on Cousineau Boulevard.

An officer engaged in a “physical altercation” with one of the men during which the man lost consciousness. The victim was transported to hospital where he died.

Ottawa Police Service (OPS) officers shot and killed a man and shot a woman they were allegedly assisting on June 27, 2022. The Special Investigations Unit (SIU) reports that at approximately 10:30 PM, a 911 call was received from a home on Anoka Street claiming someone was being stabbed. Screaming was allegedly heard on the call.

According to the SIU, when OPS officers arrived on scene, they saw a man stabbing a woman on the road. Police shot the man, who was pronounced dead at the scene. They also shot the woman, who was transported to hospital with what is described as a non-life-threatening gunshot wound.

The bodies of two other women were located in the area. They have since been identified as 50-year-old Anne-Marie Ready and her 15-year-old daughter Jasmine Ready. Nineteen-year-old Catherine Ready survived both the stabbing and being shot by police.

The man killed by police has been identified as 21-year-old Joshua Graves. His family reports that he had been struggling with mental illness. They say his mental health issues went undiagnosed until August of 2021, when he was diagnosed with a major depressive disorder.

Police shot and killed two people during what is described as an “incident” and “exchange of gunfire” at a Bank of Montreal in the 3600-block of Shelbourne Street in Saanich, British Columbia, on June 28, 2022. Police were deployed from the Saanich Police Department (SPD) and the Greater Victoria Emergency Response Team (GVERT). Two people were arrested at the scene and a search was undertaken for a third person. It is initially believed that no bank workers customers, or members of the public have been injured.

It has been reported that SPD officers responded to a report claiming that two armed men entered the Bank of Montreal at around 11 AM. An exchange of gunfire occurred and the two men inside the bank were killed. It is also reported that six police officers were taken to hospital with injuries. One witness reported hearing upwards of 50 gunshots. Others reported more than a dozen shots.

Two men were killed in a police chase that ended in a collision with a moped in St-Ambroise-de-Kildare, near Joliette, northeast of Montreal. The Bureau des enquêtes indépendantes (BEI) reports that Sûreté du Québec officers were concerned about two allegedly loud vehicles at around 8:30 PM and tried to stop one of the cars, which had a false license plate. The vehicle crashed with a moped, killing both the driver of the vehicle and the driver of the moped.