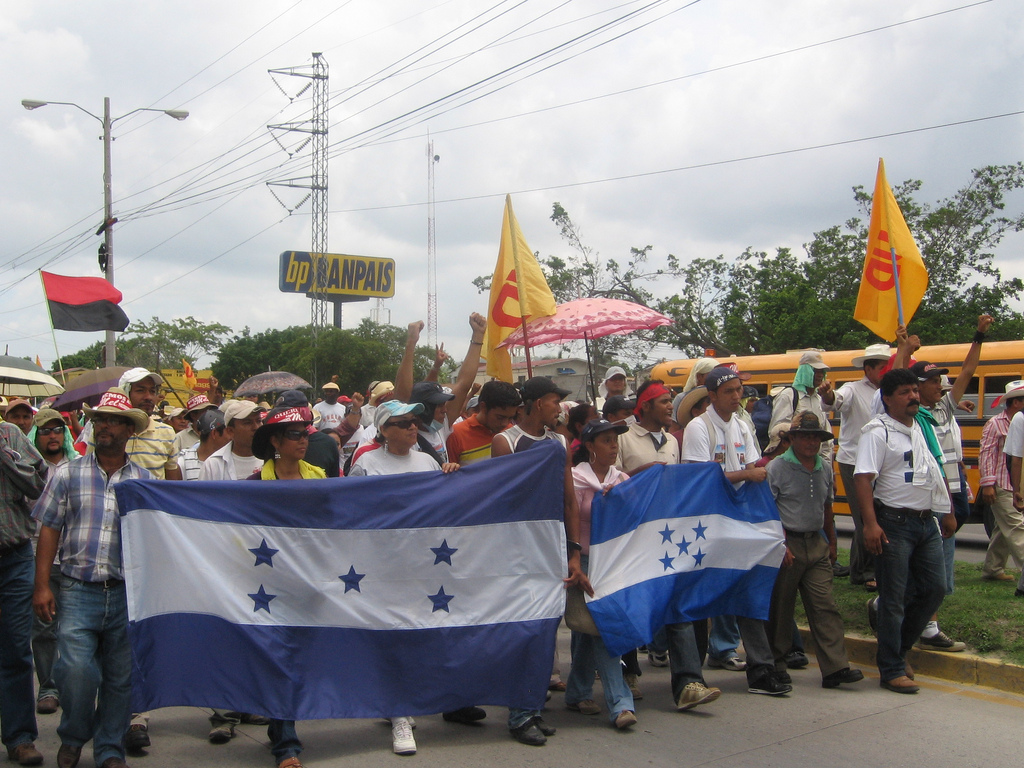 Failure on the part of the OAS to reach an agreement for the return of Honduran President Manuel Zelaya yesterday signals the beginning of a new stage, says Radio Progreso correspondent FÃ©lix Molina. As the diplomatic mission left Tegucigalpa on Tuesday without approval for the San JosÃ© Accord from de facto leader Roberto Micheletti Bain, the Honduran journalist says new sanctions are needed “that should include trade, economic, financing, and migratory elements.”

The seven-member mission accompanied by OAS Secretary General JosÃ© Miguel Insulza presented a declaration to the press at the conclusion of their two-day visit to the Honduran capital. It indicated that the de facto leader and his supporters are alone in withholding support. Micheletti expressed discord with the restitution of President Manuel Zelaya and the provision of a political amnesty, key aspects of the proposal made by Costa Rican President Oscar Arias. Speaking defiantly to the foreign delegation, he told OAS representatives that his regime is not afraid of sanctions.

For his part, President Zelaya reiterated, in particular through declarations by First Lady Xiomara Castro de Zelaya, his decision to accept each of the twelve points in the accord even though it will truncate the process he initiated to consult Hondurans on whether or not they would like to pursue constitutional reforms.

Indicating that internal pressure could be growing in favour of the Arias proposal, President of the Association of Maquiladoras of Honduras, Jesus Canahuati, told Radio Globo yesterday morning that his group supports the agreement. The armed forces are also reportedly in discussions but have yet to make any declaration.

If a resolution is not achieved, journalist FÃ©lix Molina says the situation will become more complicated and more worrisome. He anticipates “stronger social reaction resulting in heightened police and military repression.”

Last week, a delegation from the Inter American Human Rights Commission verified thousands of arbitrary detentions, disproportionate use of state forces against opponents to the coup and serious limits on press freedom during the last two months. It resolved that “only a return to democratic order will create the conditions for effective assurance of the human rights of all residents of Honduras.”

“There are no democratic guarantees, nor guarantees for the freedom of expression, nor individual guarantees in Honduras,” said Secretary General of the International Federation of Human Rights in Colombia, Luis Guillermo PÃ©rez, late Tuesday afternoon.

He described a meeting that he attended this week with independent presidential candidate Carlos H. Reyes and congressman Marvin Ponce. He noted Reyes' fractured hand and Ponce's fractured arm and ribs, injuries inflicted by national police. In this context without democratic guarantees, he said, “We are insisting that electoral results [from upcoming general elections] should not be recognized by the international community, that all manner of cooperation should be suspended for the coup leaders, and that economic sanctions should be applied against those who have supported and who sustain the coup in Honduras.”

“This is the position of the International Federation of Human Rights, of the Centre for Justice and International Law (CEJIL) and other organizations who have decided to create an international human rights observatory to monitor the situation in Honduras and about which we will send monthly reports to the OAS, the UN and the European Union.”

Rather than viewing the coup as against Manuel Zelaya who only had several months left in his presidential term, he believes that it was a coup against the majority of Hondurans. He said that the possibility of presidential re-election was never mentioned during the lead up toward a national opinion poll on June 28th that would have asked Hondurans whether or not they were in favour of including a fourth ballot box during upcoming elections to conduct a national referendum over whether or not to strike a National Constituent Assembly to reform the country's political constitution. He says they have been able to determine that 60% of Hondurans would have voted in favour.

The US took a further step yesterday to pressure the de facto regime to concede to the San JosÃ© Accord by adding a suspension on non-emergency and non-immigrant visas from Honduras to earlier cuts to aid. However, Canada's Peter Kent who participated in the OAS mission expressed continuing reluctance on the part of this North American nation to join the US and EU in retracting support.

When asked what sanctions Canada will apply, the Canadian Minister of State of Foreign Relations for the Americas failed to mention any concrete measures and said, “At the moment we are still pursuing agreement and buy in to the San JosÃ© Accord.” Speaking with Embassy Magazine on Sunday, he explained, "any imposition of sanctions or cutting of aid is going to impact first and foremost the most innocent in this crisis and that is the civilians."

But without such pressure it is unclear how a timely agreement can be reached. Ultimately, Canada's position seriously distances this country from those calling for stronger measures to bring about a resolution to ultimately ensure greater protections for Hondurans already seriously affected by the crisis.

Jennifer Moore is an independent Canadian journalist writing from Honduras for ALAI (where this article was originally published) and FEDAEPS.