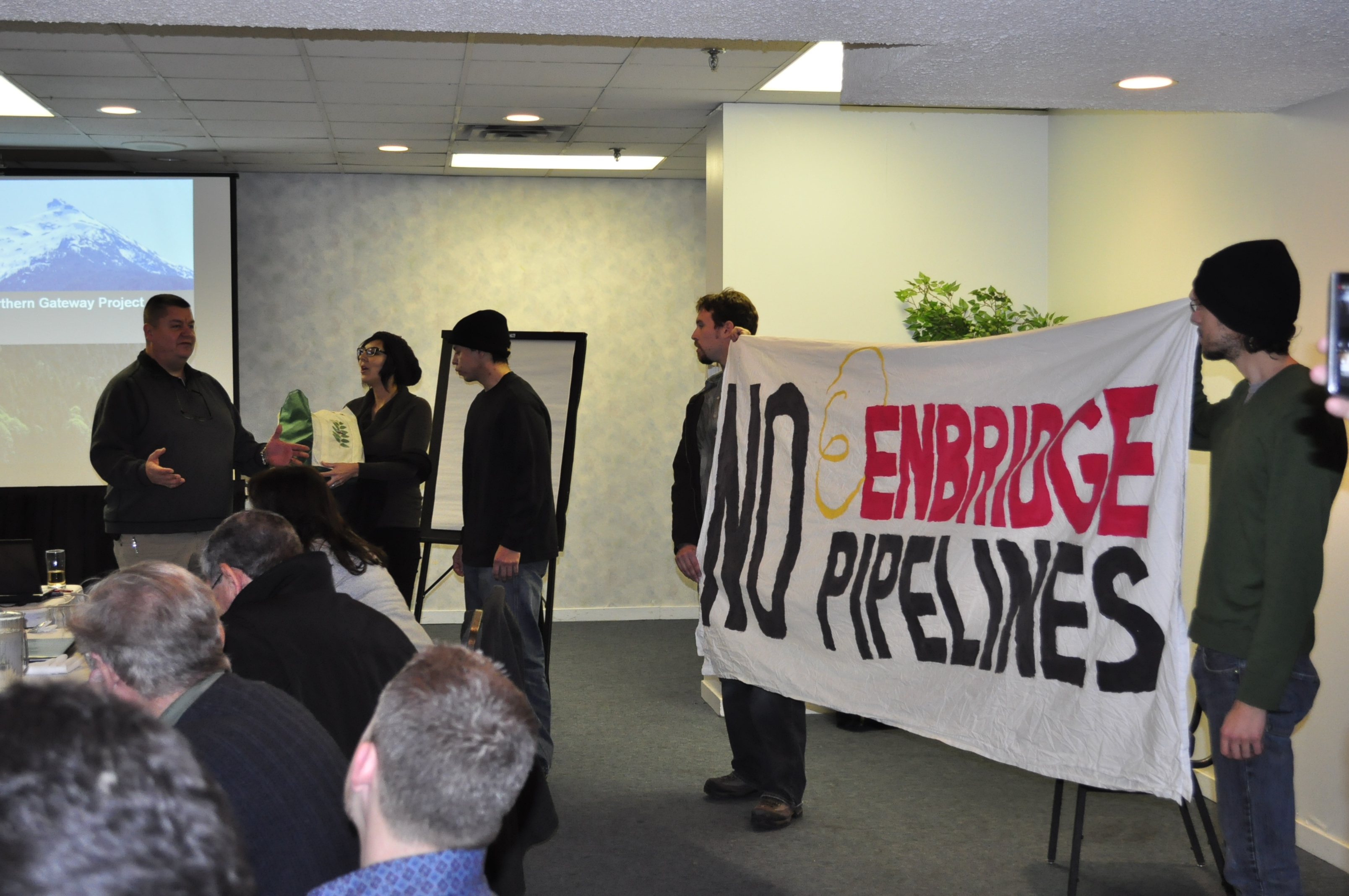 Edmonton – At 10:00 a.m. this morning, concerned community members from Edmonton, AB disrupted a meeting of the Enbridge Northern Gateway Project’s Community Advisory Board (CAB). Organizers of the action wanted to deliver a message to industry representatives and the limited community representatives that this project was violating Indigenous rights all along its route, facilitating the expansion of the Alberta Tar Sands, and facing resistance from dozens of communities not represented on the CAB.

Organizers unfurled a banner reading “No Enbridge Pipelines” and delivered a gift basket to the CAB, including messages from frontline communities, and a copy of the United Nations Declaration on the Rights of Indigenous Peoples –which Canada recently endorsed. They called on the CAB to acknowledge and recognize the rights of communities along the pipeline route, and to abandon the project.

“We’re here to disrupt the meeting in Edmonton because this is the source of the Enbridge pipeline, and to let Enbridge know that they are not welcome on Indigenous and unceded territories in British Colombia and Alberta,” Dustin Johnson, an organizer with the Sierra Club Prairie Chapter and member of the Tsimshian Nation, explained. “Despite all the greenwashing and whitewashing to justify this project, communities are still against [the CAB] process...it leaves out a lot of voices who are saying no to it.”

Enbridge considers the CAB as one of the primary parts of their commitment to “meaningful and open discussion with Aboriginals, stakeholders, communities and private landowners in BC and Alberta,” around the proposed tar sands pipeline, yet critics point out that the majority of communities along the pipeline route have refused to participate in the process.

Earlier this year, representatives from the Wet’suwet’en nation issued Enbridge a trespass notice for encroaching on their unceded traditional territories.

“Despite all their best attempts to tell the public that this project is viable, we are here to show the other side and let people know the truth – that this project will not go through” Johnson said. “There is a lot of opposition to it, and people are prepared to resist this project by any means necessary.”