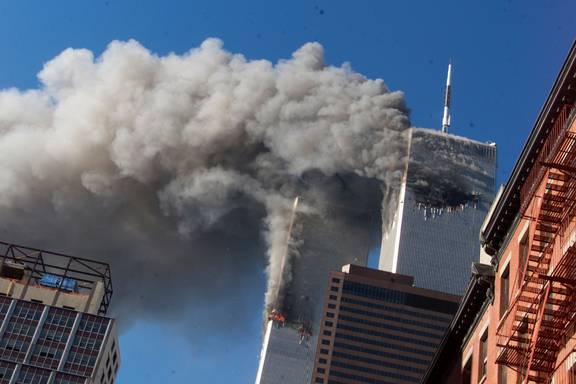 Maybe it was the Muslim prayer beads hanging on the rearview mirror, maybe it was the medical bag in the front seat with his father’s name on it–Mohammed–maybe somebody had seen him in the car and thought “that guy looks Arab.” It was impossible to know exactly what motivated the attack. But when Ali woke up on Sunday morning, September 16 and went down to the street, the message the vandal had painted on the car beside the smashed window left no ambiguity about his feelings towards people like Ali::

Ali wasn’t an Arab, but that didn’t matter. The backlash wasn’t too fussy in its choice of victims. It didn’t matter that Ali was a McGill University medical student from Iran. He was one of “them.”

This is the opening scene of a chapter in North of 9/11 (Cumulus Press, 2006), my historical novel set in Montréal in the immediate aftermath of the 9/11 terrorist attacks. Ali’s story, like many in the book, is non-fiction, part of the historical backdrop to the fictional plot.

People like Ali had never had it easy, but 9/11 upped the ante, highlighting the target that was already on the backs of “them.”

Yasmin was another victim of the post-9/11 backlash in Montréal:

…Yasmin, a Pakistani student at Concordia who wears a hijab, passed a man downtown–not a skinhead with a swastika on his jacket, but a well-dressed man in an expensive suit–who told her to “stop terrorizing him” and that if he had a gun he would like to see her dead.

Luckily for Yasmin, that man didn’t have a gun, but George Bush’s America had a lot of them, and so did the NATO coalition it rapidly put together (including Canada) to invade and occupy Afghanistan over the next twenty years. It didn’t matter that the people of Afghanistan knew nothing of the Twin Towers, let alone any plan to attack them. It didn’t matter that the Taliban regime was not itself responsible for the attack and was willing to come to terms for surrendering Osama bin Laden for trial.

People wanted revenge, against Ali, against Yasmin, against the poor men, women and children of largely rural Afghanistan already ravaged by decades of war. And people would get their revenge. The need for revenge would be mobilized by the wealthy and powerful, the war profiteers and the architects of empire, to fight a never-ending “war on terror” all over the world, but most notably in Afghanistan, Iraq, Libya, Syria, Yemen and Somalia.

The price of that revenge was paid and is still being paid mostly by the civilian populations of those far away countries, but a price has also been exacted from the troops called upon to bomb and to occupy in the name of “freedom” or some other ridiculous platitude used to justify the ongoing carnage. Even people not directly involved are paying for the trillions of dollars wasted on war.

When thousands of people are horrifically murdered in broad daylight in the busy downtown of a thriving metropolis with the cameras rolling and the world watching, one might argue that seeking revenge is a natural reaction for the millions witnessing the horror. But not everyone wanted revenge for the slaughter of 9/11.

Rita Lasar’s brother, Abraham Zelmanowitz, was on the 27th floor of the North Tower on 9/11. He could have gotten out but he decided to stay with Ed Bayea, a wheelchair-bound paraplegic co-worker, to wait for help. Both Abraham and Ed died. Rita did not seek revenge.

When President Bush cited Rita’s brother in a speech at the National Cathedral on the following Friday, she saw that his death would be used to fan the flames of war and bring death to civilians in Afghanistan. She sent a letter to the New York Times on September 17, 2001:

It is in my brother’s name and mine that I pray that we, this country that has been so deeply hurt, not do something that will unleash forces we will not have the power to call back.

Rita went on to participate in the founding of September 11th Families for Peaceful Tomorrows. She died in 2017. We should have listened to Rita.

The forces unleashed have produced untold suffering for millions around the world, from Afghanistan to Somalia, as civilians have been and are still being killed, wounded or forced to flee their homes. Unlike the spectacular massacres of 9/11, that suffering has largely gone unseen in the West. Media embedded with occupying armies generally tell a different story.

But we do see more terror inflicted on Western victims. The cameras are always rolling for that: Madrid, London, Fort Hood, Paris…

Twenty years on, it is time to open our eyes to the full breadth of the suffering and the futility of the never-ending so-called war on terror.