MEDIA RELEASE: "Chasing Ice" at Rainbow Cinemas on the Solstice

MEDIA RELEASE: "Chasing Ice" at Rainbow Cinemas on the Solstice 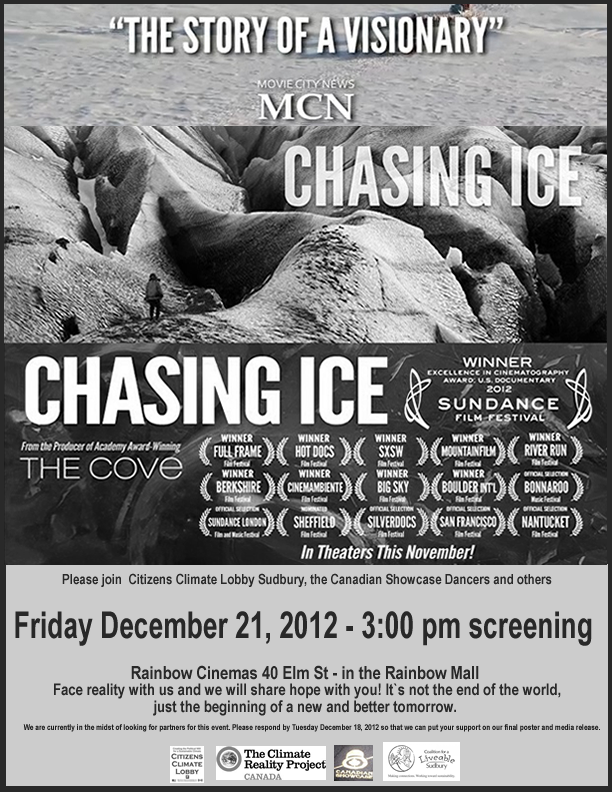 What:  Watch an award-winning movie about the reality of speed at which climate change is impacting icefields around the planet with people who are the front lines of creating the political will for a liveable world.

Members of Citizens Climate Lobby, Coalition for a Liveable Sudbury, the Climate Reality Project and the Canadian Showcase Dancers  will be at the movie to share climate solutions and hope before and after the screening of Chasing Ice.

Great Quotes : "The story of a visionary" - Movie City News
"James Balog is a hero as courageous as any risk-taking patriot that ever lived." - Peter Joseph, Citizens
Climate Lobby California

Why: Field reports from Citizen Climate Lobbyists across North
America are praising the cinematography of this movie. Audience
members are said to be wanting action after they experience the
reality of the sheer magnitude of the ice melting.

The climate is changing much faster than scientists predicted in the last
Intergovernmental Panel on Climate Change (IPCC 2007) report and
this movie shows the changes of glaciers around the world.

Politicians need the help of citizens to create the political will for a
sustainable climate. Citizens Climate Lobby teaches citizens how to
lobby for a fair, predictable and transparent price on carbon pollution .
We will be at the movie to share hope and solutions with moviegoers.