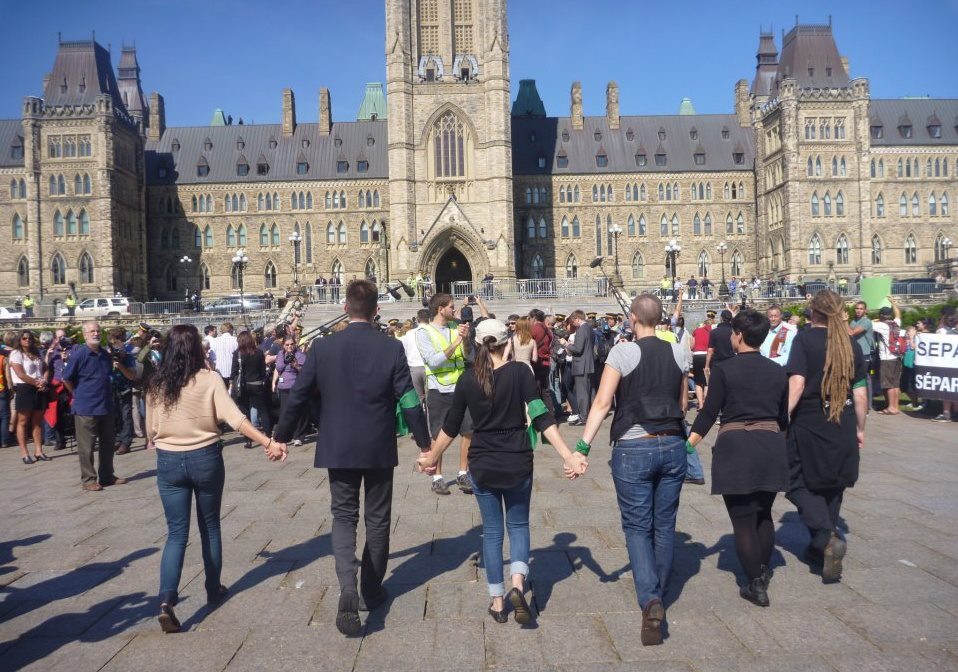 September 26th – A day of Canadian action that should become part of our history as the largest act of civil disobedience for climate action. Almost 600 people stood in solidarity atop Parliament Hill to send the message to our government that the Alberta tar sands destroy life. This non-violent action’s intent was: “to tell the Harper government that we don’t support his reckless agenda; that we want to turn away from the toxic tar sands industry; and that we oppose the direction he's taking this country.”1

So many of us came together under this message to share our thoughts, opinions and feelings about what is happening and appears likely to continue without an intervention of sorts. We were and will continue to be that intervention.

Our government needs to hear, recognize then accept that Canadian citizens no longer support the facade that we are given when it comes to developing the Alberta tar sands.

We are told we will be given jobs2. Those jobs will be found in the U.S. where the oil is going to be refined3. We are told it will stimulate our economy4 to sell our oil to other countries5; we will be buying back the oil that is refined elsewhere6.

We are being lied to.

Developing the tar sands damages more than our government’s reputation. Tar sands development destroys the Boreal Forest, an expanse of the world’s largest terrestrial biome. It contaminates7 groundwater, sources of water that are used in First Nation communities along the Athabasca River. The Athabasca River is no longer safe to drink out of and live off of. The rates of cancer in these communities have been increasing8. Individuals are dying soon after they are diagnosed.

I stood on 111 Wellington Street to say that I do not support a government that allows this to happen. I stood up and said that I do not support an agenda that dismisses the ethical treatment of human beings. I stood up and said things have to change when you do not, oh dear elected officials, create the change that is necessary to call us a civil country, a respectful country.

When you lie to your bosses (for we are indeed the ones you are to report to. We are your paycheques, your bonuses and your travel expenses. We are the people who give you the jobs you so dearly hold on to) you demean the positions that you hold and you devalue the political system we live within.

I broke the law with hundreds of others because I wanted to say to Canada that when our system of rules, our guidelines that are in place to govern the behaviour within our country, are not followed by the people who uphold the political shape and structure – the foundation of Canada – those laws that we rely on are no longer in place for the right reasons.

A movement is occurring and with the proper gusto, the correct decisions, we can, citizens of Canada, live in a country that respects life, integrity and principles.