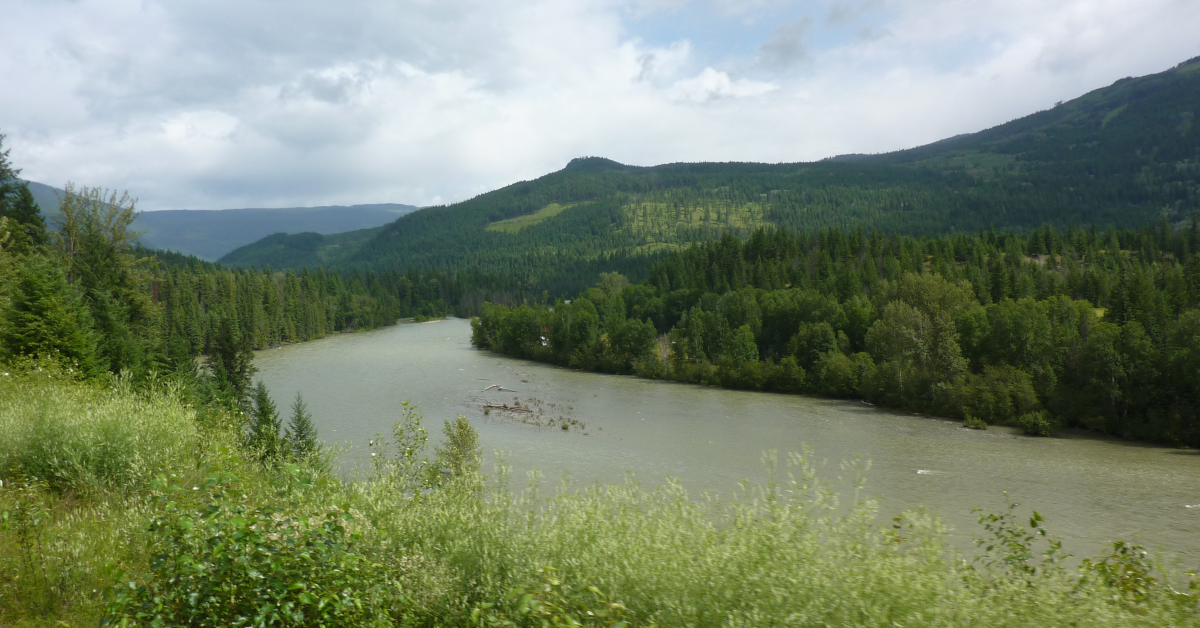 April Thomas is a land defender and member of the Secwépemc Nation, from the Canim Lake Band in the central interior of what is colonially known as British Columbia. Scott Neigh interviews her about the trajectory of her work defending the land, about grassroots opposition to the Trans Mountain tar sands pipeline expansion project, and about Secwépemc Say No TMX and the ongoing court battle in the wake of the arrest of land defenders at the Secwépemc Unity Camp.

In the BC context, the vast majority of the land is unceded, unsurrendered, and not covered by any treaties – of course most treaties didn’t do so either, but in BC it is even clearer than in the rest of the country that nothing has extinguished the right of traditional Indigenous governance systems over their own lands. In contrast, the governance imposed and funded by the Canadian state in the form of band councils have, at most, authority over reserve lands, which are a miniscule fraction of nations’ historic land base. Because of that, Thomas argues, “the bands have absolutely no authority to sign away our rights the way they do” when it comes to resource extraction and consequent environmental destruction on those lands.

Thomas’ early involvement included grassroots opposition to the modern day treaty process in BC and working with other grassroots Secwépemc people in a land defence camp in response to the Mount Polley mine disaster of 2014. One of the worst such disasters in Canadian history, it involved the rupture of a mine tailings pond and resulted in the release of around 25 billion litres of toxic effluent into the surrounding watershed. Thomas said, “That had huge impacts on our community, and … has really affected the health and wellbeing of our people.” She also spoke about these issues (and others) at the United Nations Committee on the Elimination of Racial Discrimination in Geneva in 2016.

In the years since then, perhaps the highest profile land defense struggle in Secwépemc territory is around the Trans Mountain tar sands pipeline expansion project. The original pipeline was constructed in the 1950s, long before the Canadian state even pretended to seek genuine consent from Indigenous peoples. In 2012, then-owner Kinder Morgan proposed to build a new pipeline along roughly the same path, with almost triple the capacity. It was approved by the Liberals in 2016, and after Kinder Morgan hinted that they were considering scrapping the project, the Trudeau government bought it in 2018. Projected costs have ballooned to $21.4 billion. The federal government recently announced it will provide the project with no more public funding, but they are still determined to go ahead with it despite vigorous grassroots opposition from Secwépemc and other Indigenous peoples, and from the broader environmental and climate movements.

Thomas says there are “so many concerns [with Trans Mountain that] I don’t even know where to begin. But for me personally, it’s for our people.” For one thing, pipelines leak, and that represents a serious risk to the people, land, water, and creatures in Secwépemc territory. That has always been true, but in recent years the growing impacts of the climate crisis on British Columbia, including the growing frequency of intense fires as well as flooding, makes damage to the pipeline even more likely. Thomas said, “I own a forestry company, so I know firsthand and have seen firsthand all the damage that’s been done by the wildfires. And it’s hit almost every one of our communities in the Shuswap Nation, [which is the anglicized name of one of the two tribal councils into which the Secwépemc people are divided].” As well, the fact that the project does not have the consent of the Secwépemc people and traditional governance structures is a fundamental problem.

Thomas has been involved in opposing the pipeline in multiple ways, most recently in relation to Secwépemc Say No TMX and the Secwépemc Unity Camp. The camp was brought together in 2020 by Secwépemc hereditary chief Sawses (also known as Henry Sauls), and his daughter, Secwépemc matriarch Miranda Dick. The goal was to monitor the project and engage in ceremony near where the pipeline would go underneath the Thompson River. Thomas said, “We were doing this all under Secwépemc laws and authority to protect the land.”

On two separate days in October 2020, as the company was about to commence drilling, people involved with the unity camp engaged in ceremony, blocked the drilling, and were arrested. Though Thomas was originally present intending to act as a legal observer, she ended up being arrested as well.

The resulting court process has been long and arduous. Thomas said that it has been difficult at times to get clear answers about the charges and about how the Crown intends to proceed. Her hypothesis is that they were “trying to manipulate the whole system, and confuse us and force us into pleading guilty.” In addition, she said the judge does not seem to understand the role of Aboriginal rights and title, even within the constrained, colonial context of the settler legal system. She added, “And the judge and the prosecutor have been rude to us at times. And I would even say racist.”

The trials for the two groups of arrestees are coming up in March and April, respectively. Thomas encourages people from elsewhere in the Canadian state who want to show support to both continue acting in whatever ways they can to oppose Trans Mountain, and also to donate at Secwepemc Say No to TMX Trial Support on GoFundMe to cover the land defenders’ legal expenses.

Thomas said, “I’m really happy and proud that I got arrested with these other seven land defenders, because they’re very resourceful and instrumental and smart and strong. And together, all eight of us make a really excellent team and standing up against this corrupt, oppressive, genocidal system that we’re being forced under, especially in the criminal courts.”