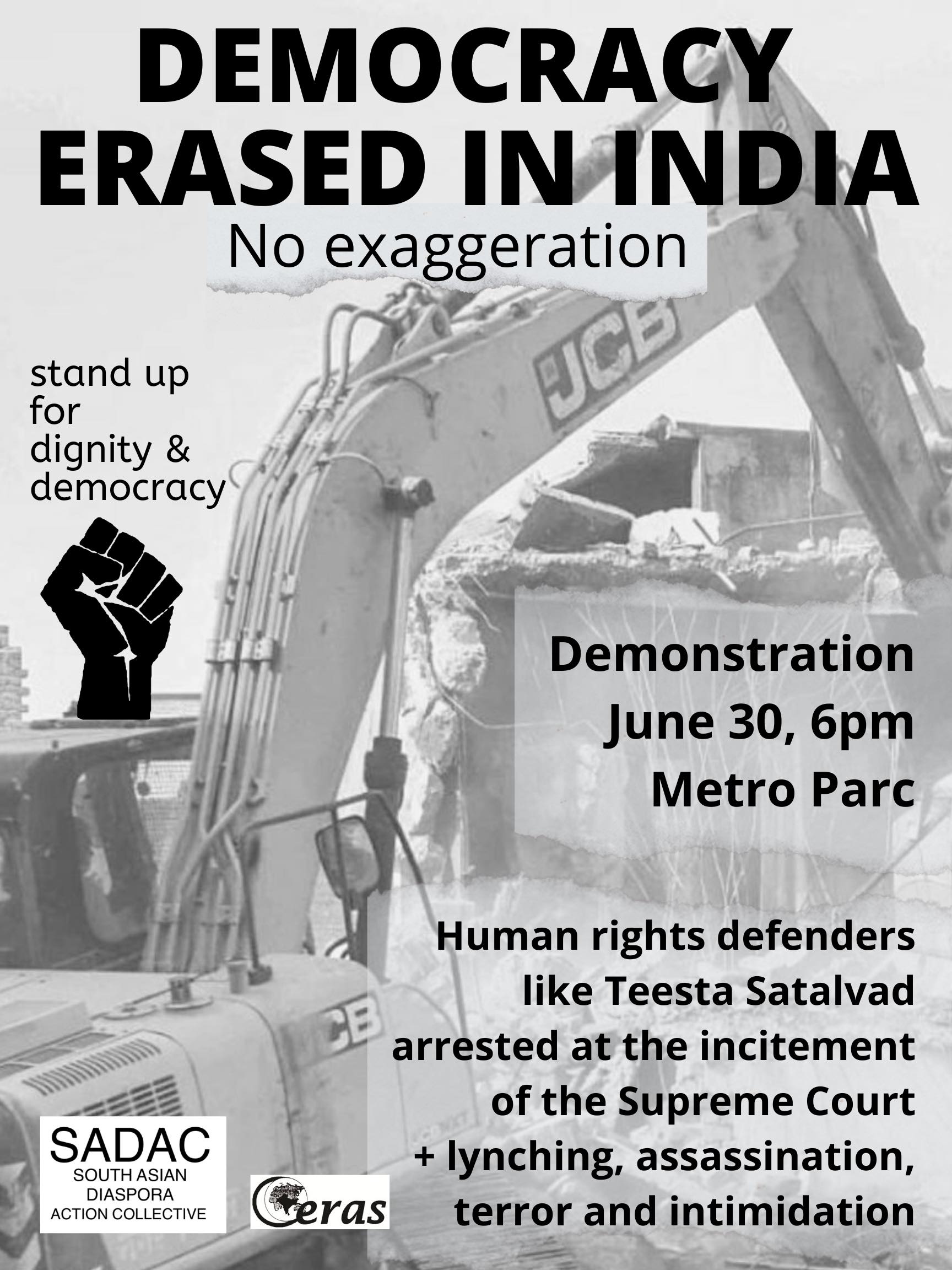 What: Protest
When: Thursday, June 30 at 6pm
Where: In front of Parc metro station

On the eve of Canada Day, Montrealers will join others around the world to sound the alarm that the largest democracy in the world is being dismantled. Today, India is like Germany of the 1930s; state violence and fear are deployed against dissenting voices. In a classic tactic employed by authoritarian regimes, those working to uphold democracy and the rule of law are accused of terrorism, inciting inter-religious group violence and anti-national activities and imprisoned..

The same day as the US Supreme Court struck down Roe v. Wade, India’s Supreme Court also issued a most controversial judgment, unprecedently giving a greenlight for the arrest of two human rights defenders, who were picked up within 24 hours of that decision. Teesta Setalvad, renowned human rights activist and advocate for justice of minorities was arrested without warrant. The Supreme Court verdict against Setalvad includes “audacity to question the integrity of every functionary involved,” and that “those seeking justice [...] need to be in the dock”. The other person arrested was  R.B. Sreekumar, former Director General of Police in Gujarat, because he had testified in proceedings related to the Gujarat genocide of 2002, against then Chief Minister of that state, Narendra Modi, who is now the Prime Minister of India, the most powerful position in the land.  Soon after, on June 27, journalist Mohammed Zubair, of AltNews, a fact-checking website, was arrested on charges of hurting religious sentiments, code in India for inciting violence between Hindus and Muslims. Meanwhile those who he was reporting on, who openly called for genocide of Muslims enjoy impunity.

The world’s largest democracy has become the personal fiefdom of Hindu ethno nationalists. Majoritarian tyranny prevails. The state is going after those they see as standing in their way;  The judiciary follows the whims of the ruling right wing party, BJP (Bharatiya Janata Party). Arrest, lynching, house demolition, assassination, terror and intimidation are everyday occurrences, generating fear and misery.

We call on Prime Minister Trudeau and his government to denounce the Emergency-style arrests, dignity for the minorities, and that they join other prominent voices across the globe in demanding the release of all political prisoners in India.

We will be gathering on Thursday June 30 at 6pm to denounce the injustice, violence and discrimination against Muslims, Dalits and other minorities.