Artists Fuse Data and Art to Mobilize the Masses

Artists Fuse Data and Art to Mobilize the Masses 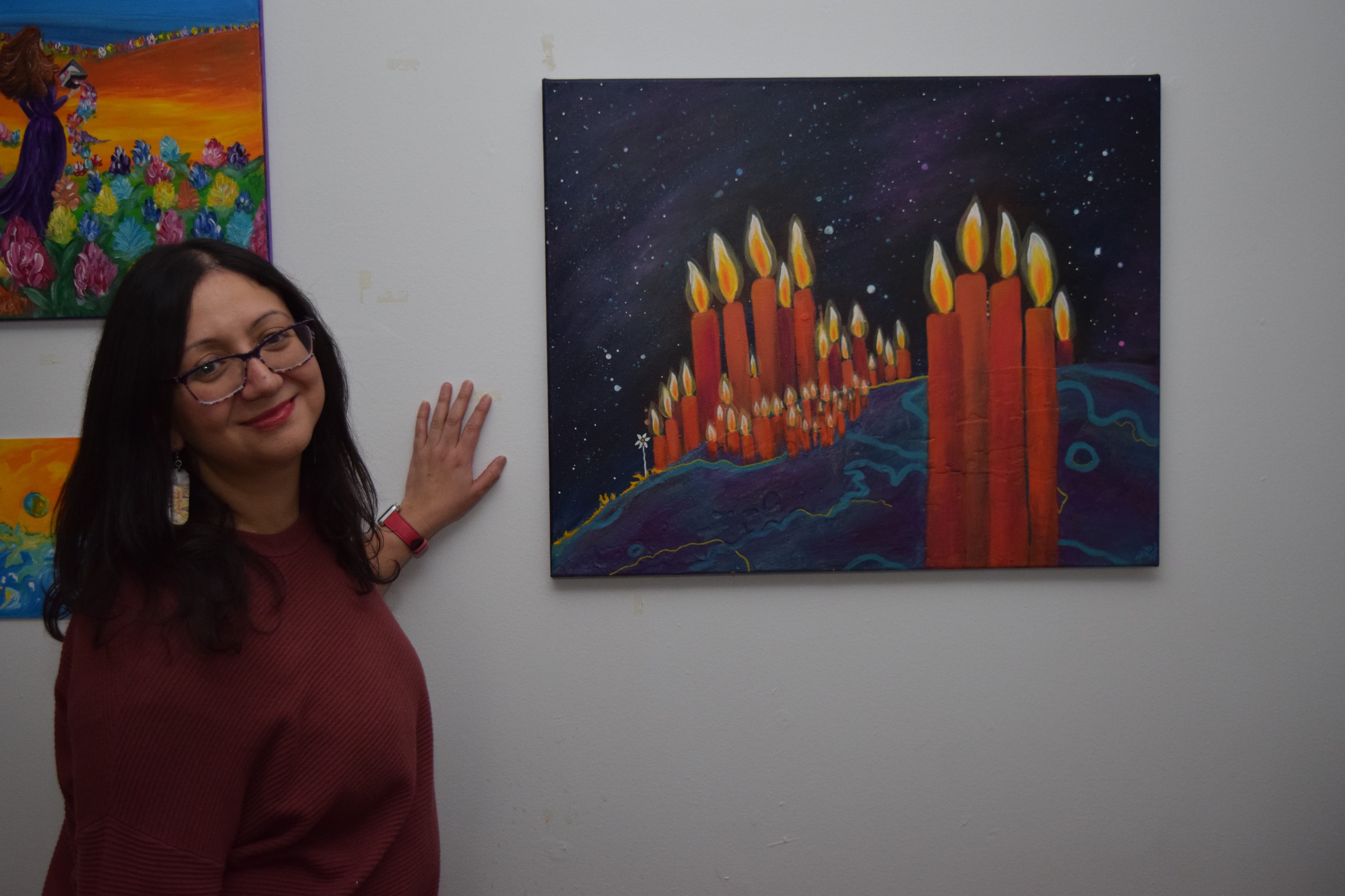 In one of a series of pages containing hand-drawn paintings, the silhouette of a single flying bird stands against a giant red sun and blackened clouds in the background. Menacing shapes of several warplanes close in from behind.

“It’s about how warring nations want to impose their systems by way of force, while peace-loving ones become their victims,” explained its creator, Jose Gonzalez, who in his youth had joined the resistance against El Salvador’s US-backed forces that sought to quash popular dissent during Cold War-era tensions.

In the following page, however, a flight of doves chases the warplanes towards oblivion.

“That symbolizes peace coming,” he added.

It is but one of hundreds of paintings and poems that Gonzalez has created and amassed in his Toronto home over the years. Together, they share a history of war, political struggle and resistance that expands over three decades and two continents.

While he’s currently in the process of cataloguing and displaying it, Gonzalez says he knows his art -- most of it drawn on pieces of paper using markers, colours and acrylics -- will not sell for millions on the capitalist market, nor be displayed in millionaires’ mansions.

But that’s not what he's after.

As a former teacher, he stresses the educational and transformative power of grassroots art, whose real value, he says, is in the history it reveals and in its power to rouse people to action. Around 2010, Gonzalez was also the president of Poesia de Resistencia (Resistance Poetry), a Toronto-based group of grassroots activists and poets, during which time he provided a platform for marginalized voices to speak about their realities. The group’s second annual festival was in honour of the Cuban Five, Mumia Abu-Jamal and Leonard Peltier.

In both of these roles and as a human rights activist, he says, his goal has always been to educate through art.

“Each person, despite their condition, origin or development, carries a great history inside of them,” Gonzalez told The Media Co-op in Spanish in a phone interview. “So we as a society must help them feel united and to bring out the art they carry inside.”

To this end, Gonzalez is working on launching a project titled, "El Arte en Ti" (The Art In You), which he’ll use to encourage others to discover how to express themselves through art. It will also include a website where some of his art and poetry can be appreciated.

Helping him make that website is fellow activist and Toronto-based artist, PH FLO, AKA Patti Flores, whose own popular education project, which she’s calling Cluster of Colours, fuses data and art to inform and mobilize.

In "Giant Art Candles for Justice," for instance, lit red-orange candles resembling huddling bodies in a vigil stand closely together atop a darkened Earth and against a black, starry sky. But it also doubles as a “bar chart visualization of the crisis in Honduras (in particular the 2017 electoral fraud),” according to the Cluster of Colours Facebook page.

“I used candles instead of a ‘bar chart’ to depict the data...related to the victims,” Flores, a Honduran-Canadian, explains. “The dataset was collected by a human rights advocate with the goal to bring justice to these people and I painted about it to help raise awareness... (and) to support those that stood to defend their democracy, were illegally incarcerated and...remain illegally incarcerated.”

In another piece titled "Heat Map" a single dying flower grows between dripping black oil on one side and flowing red pixilated lava on the other. It's "when oil meets data," she explained through a Facebook message. "In relation to our environment, but also to the value of data nowadays."

Flores has been making a name for herself as a pioneer of #DataArt, a form of art that incorporates raw information as its building blocks. By fusing the two, she hopes to tell the human side contained within the cold data, while simultaneously endowing her art with factual information derived from it.

“We can throw the numbers out there,” she said in a phone interview, “but if we tell the story of the people that fought for their democracy in a way that is visualized and that includes the methodology that went into it, people will remember more, and they are more likely to act.”

And action is precisely what Cluster of Colours seeks to foment.

As someone who’s worked various data-driven jobs throughout her life, Flores knows that in the age of the Internet, data is Queen. Amassed in troves called datasets, it is the stuff used for machine-learning purposes known as "deep learning."

In a nutshell, technology website Interesting Engineering explains deep learning as the "processing (of) visual data and analyzing (of) images from the images, what objects or living things exist, relationships with each other, event estimation, object/person tracking, etc."

In practice, it is the stuff that allows Artificial Intelligence algorithms to predict everything from our Netflix viewing preferences to the probable outcome of legal proceedings to the way police determine likelihood of criminality (read: carding).

The problem is that based on the data used, and on who is collecting it, AI systems can create more problems than solutions for those who have historically been criminalized and marginalized – people of colour, immigrants, Indigenous peoples, the same groups currently under attack by white supremacists, police and politicians across Canada and the United States.

Indeed, according to a recent report titled, Discriminating Systems: Gender, Race, and Power in AI, “The use of AI systems for the classification, detection, and prediction of race and gender… are replicating patterns of racial and gender bias in ways that can deepen and justify historical inequality."

Flores has therefore set out to build a knowledge-sharing artistic hub in Cluster of Colours. Through it, she wants to help activists catalogue, analyze and disseminate their own data to "further their cause," while also drawing inspiration to create accessible, grassroots art for the masses.

Through Cluster of Colours, Flores also wants to make the data available to students in order to combat the "Eurocentric" datasets currently used in schools – today's version of Eurocentric history books of the past. This will help give future data scientists creating AI systems a more contextualized picture of the struggle and lived realities of people of colour.

Mining from her own experience, she will also help connect those who are interested in learning how to use data with as many free resources as possible, including other community leaders and activists as well as any available free courses.

Cataloguing 200 of Gonzalez’s paintings and poems of political struggle and resistance in El Salvador is Flores’ first attempt at this. The mined dataset, she says, will be the first of its kind as it will be collected by and for people of colour and activists, something Flores refers to as "dataArt[ivism]."

“We as community organizers and influencers have a lot of information,” she explained. “We know how many people have been killed in defending the land. We know how many have been detained in Toronto…But we have it so unorganized it doesn’t get out of our community clusters. So how do we get it out?"

Like Gonzalez, Flores' answer has been grassroots art – the kind that mobilizes and empowers us to reclaim ownership and expertise over our own narratives and to become masters of our own fate.

"We see friends of people and family being deported," she said. “We see people on the streets. We know this because we are a community. We are already experts. We just need to empower ourselves with the word.”

For his part, Gonzalez is eager to participate in the project.

Aware of the overwhelming amount of dis-information available today, he is happy to collaborate on anything that will help provide an “alternative way of organizing the masses.”

“Art has always been a formative source, since time immemorial,” he said. So “let’s work together to organize ourselves. The idea is to work, to learn and to walk together.”