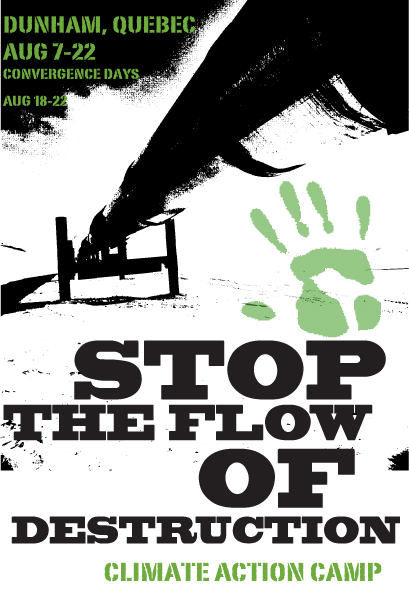 Montreal – Climate Justice Montreal released its newest publication, entitled Stop the Flow of Destruction, this week to draw attention to the upcoming Quebec Climate Action Camp. The 12 page publication includes information about the camp, and basic primers on climate justice, the tar sands, the Trailbreaker pipeline project, and moving forward on people's solutions to the climate crisis.

The release comes as organizers gear up for the Quebec Climate Action Camp in Dunham QC, the site of a proposed pumping station to facilitate the a pipeline reversal which would bring tar sands oil through Quebec as part of a project known as the Enbridge Trailbreaker.

The publication is available for download here, and paper copies can be requested at climateactionmtl@gmail.com. A French version of the publication will be available by the end of the week.