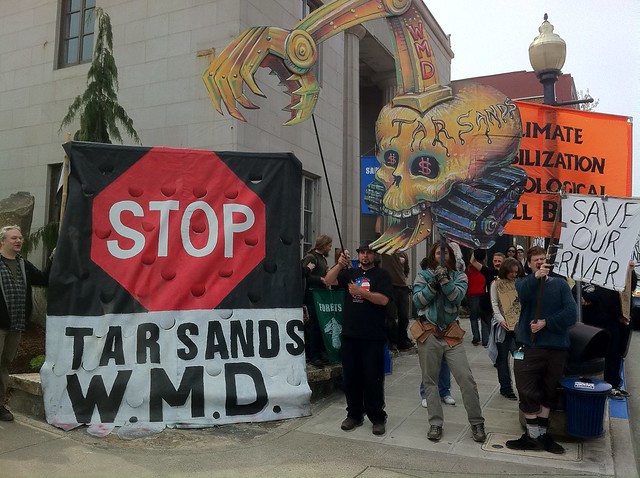 Federal Green Party leader Elizabeth May seems to have made a 180-degree on Alberta’s Tar Sands after proposing that the dirty bitumen be processed and used in Canada instead of importing “foreign oil.” It’s part of the Green Party’s new Environmental Action plan known as “Mission: Possible,” which calls for the upgrading of East-coast refineries in order to process the greenhouse gas emission-intensive bitumen.

But the apparent backpedaling has confused many of her traditional environmentalist allies, as it was no more than a year ago that May was getting arrested for protesting the expansion of the Kinder Morgan pipeline.

Of course, May says she is still against any type of pipeline expansion, and insists that the controversial $15-billion plan is a necessary step to “wean” Canada off of oil completely. The plan is predicated on getting Canada to stop importing foreign oil, and calls to double cuts to greenhouse gas emissions by 2030 and completely by 2050.

“The solution is to talk about processing this solid substance bitumen in Alberta for a market that's called Canada,” she said last year in an interview with the CBC’s Stephen Quinn, host of The Early Edition. “We do export most of what gets produced out of the oil sands. It's not locked up there waiting for pipeline approval. There are lots of pipelines already.”

But environmentalists and Indigenous land defenders would not be faulted for being confused on May’s cheerful championing of “already” built pipelines and of Alberta’s bitumen.

It was only about a year ago that she was speaking about the importance of civil disobedience outside the British Columbia Supreme Court that had fined her $1,500 for contempt of court for her protest against the Kinder Morgan expansion.

"My job continues, to do everything I can to represent the constituents of Saanich-Gulf Islands, to protect the Salish Sea, to stand with First Nations in solidarity and to continue to speak, as we can in a democracy, against this project,” she is quoted as saying by CTV News.

The confusion arises because while she has explicitly said she doesn’t support pipeline expansions or the building of any new infrastructure, she has been less than clear just how continuing current levels of production of some of the most GHG-intensive substances on Earth -- bitumen -- will get us away from it.

When pushed about this by the CBC’s As It Happens host Carol Off, May’s answer sounded more like an olive branch to Alberta’s conservative constituency than an analysis of how to actually stop depending on oil.

“How do we…make sure Albertans don’t feel victimized by climate action?” she said. “Well, as long as we’re using it, we’ll use a declining amount of the bitumen being used in Alberta, and over time that production of bitumen is shifted solely to feedstock for petrochemical industry and nothing for burning.”

Furthermore, while blaming the media for assuming the Green Party is talking about “shipping bitumen across the country,” May simultaneously asserted that doing so would only include “existing infrastructure from pipelines that are already under long term contract.”

So, will it be transported or won’t it be?

More than a little suspect

It sounds as if May believes that a “sensible plan for the oil sands” exists that doesn’t involve shutting them down.

This doesn’t completely jive with the leader of Quebec’s Green Party -- at least one dissident voice within naturally-assumed allies.

Calling it a “somewhat nationalist argument” in an interview with the CBC’s As It Happens panel, Alex Tyrrell also appeared confused with the apparent contradictions.

“It's trying to talk about having jobs in the Tar Sands when really we should be talking about how to shut (them) down…as quickly as possible,” he said. “That oil needs to stay in the ground. It's a scientific consensus.”

Perhaps the fact that he stressed that he was in agreement “with 90 percent” of the platform, and that he was only “trying to criticize this specific policy” says more about the deficiency of the plan than it does about his party loyalty. And perhaps it says even more that Conservatives like Andrew Scheer and Jason Kenny -- vociferous champions of the Tar Sands -- have applauded her plan.

For her part, May has also used the economic argument, saying it makes more sense for our economy to use our own (dirty) oil and create jobs in the process of weaning off of it and towards a fully energized, green economy, than it does to import it.

But not everyone is convinced of her math.

In a report by energy-focused website EnergiMedia.com, the argument is made that it would actually end up costing a lot more to process and use Alberta’s heavy bitumen given the lack of capable infrastructure.

Citing a 2017 study from Kevin Birn of HIS MarkIt, the report argues that to do as May proposes and upgrade current infrastructure to replace “all foreign crude would require $30 billion.”

“Is a federal government that just shelled out $4.5 billion for the Kinder Morgan Canada pipeline assets – and still has to spend as much as $9 billion to finish the Trans Mountain Expansion project – likely to be keen about spending more billions on upgraders?” the report posits.

Citing CEO of the Canadian Energy Research Institute Allan Fogwill, it also suggests that “non-economic factors” may be responsible for the lack of interest in replacing non-US foreign imports, “such as long-term contracts and the trust that comes with a reliable supplier.”

The report ends by highlighting that because “no one is betting on the long-term growth of global crude oil markets,” the next 20 years are hedged more or less solely on the expansion of the Asian markets, namely China and India.

But the only way to get our stuff to them, it suggests, is through pipelines, which makes May’s sudden championing of the Alberta Tar Sands -- even if she was arrested at an anti-pipeline demonstration -- more than just a little suspect.