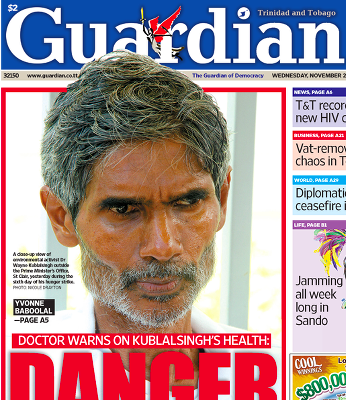 Dr. Wayne Kublalsingh, who I interviewed for the piece below, is currently on his eighth day of a hunger strike, refusing both food and water. He has reached a critical point where massive heart or kidney failure have become a very real possibility. Kublalsingh is one of Trinidad & Tobago's most well known environmental activists. According to the Trinidad & Tobago Guardian, "Kublalsingh’s family said his life was in the hands of the Prime Minister, whom he is asking to appoint an independent technical team to review the Mon Desir to Debe leg of the Point Fortin highway project. The project would disrupt the lives of some 200 families in the area, many of whom depend on subsistence farming, and damage the environment through flooding, protesters are saying." The article that follows provides some context on the highway project that Mr. Kublalsingh is risking his life to prevent.

August, 2012—On May first, international workers day, dozens of people got to work on a revolutionary new food forest. Just after dawn, they plowed the land, tilling the rich soil. Then, they lined up and planted plants like pineapples, cassava, and sugar apples. Maybe it sounds like a typical day in the fields. It wasn’t.

The land in question is slated to become a highway. “They want to take paradise and turn it into a parking lot,” said Atillah Springer, a journalist and organizer.

“This is our land. We taking it back. We don’t need permission from anybody,” Ameena Mohammed, a local resident, told The Guardian while she planted a coconut tree.

This direct action was one among many, which included the erection of a protest camp in Debe against the highway expansion. Together, these events have brought national and international attention to a struggle with deep roots in local communities.

Women residents have been making noise about the impacts of the proposed highway for some time now, but the buzz around the highway project was amplified by the protest camp actions.

Part of the new highway proposal would see a 47 kilometer long, four lane divided highway running from San Fernando to Point Fortin. The section contested by the Highway Re-route movement is a separate addition to this new highway, which would run from Debe to Mon Desir, impacting 13 communities in the Oropouche Lagoon, and include the construction of an interchange.

The battle is about far more than a highway. It is about the future and the past of the country.

According to Dr. Wayne Kublalsingh, if built, the $7.2 billion roadway would destroy 1,000 acres of farmland, destroy 300 homes, and create permanent flooding. “The amount of damage it will do, I don’t think is justified,” he said.

People who for generations have lived in the serene lagoon area stand to lose their land and their connection to it. Or, in the words of the Highway Re-route Committee, “Peaceful and empowered communities would be broken up, and homesteads and farms seized.”

"They can't done pay me money for this,” Ivan Ramdass, whose grandfather settled the land and raised nine children farming on Banwarie Trace, told Trinidad Express. “How can they want to just shove you out just so? And what they giving us in return?"

The level of repression used by the government in evicting the protest encampment from the highway’s path shows how important this infrastructure is to the state. When the camp was destroyed the first time, none other than National Security Minister Jack Warner, was there to oversee the police and soldiers who carried out the job using heavy machinery. “The first time it was the soldiers, a minimum of police, maybe five or six, there were 30 or 40 soldiers, they were instructed by Minister Warner, Minister of National Security,” said Kublalsingh.

Following the second eviction, campers moved to erect a new camp, one on privately owned land, and another in front of the Palace of Justice in Port of Spain. The camp in the capital was taken down in early August as a court case against the eviction got started.

When the highways were first proposed in 2004, they may have been part of an industrialization plan that included two proposed smelters, which were also shut down as part of a movement which Kublalsingh helped support.

Though the government is seriously entertaining proposals to set up tar sands in Trinidad and Tobago, it is too early to link the highway construction – some of which could eventually benefit companies involved in extraction – to the tar sands.

“Whether there is a link between the highway and the tar sands, I really cannot say, I cannot say that for sure,” said Kublalsingh.

While campers maintain a presence in the lagoon area, keeping a watchful eye for any signs of movement, another group will fill the courtrooms, confident that they can stop the pave by appealing to justice.

This article was originally written with the support of Oilsandstruth.org, and was published together with other reports in a 24 page booklet for distribution throughout the island nation this fall.