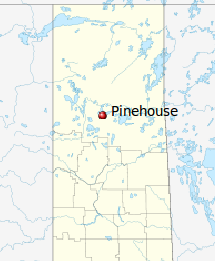 PINEHOUSE, SK - Something is rotten in the State of Denmark, according to people in the northern village of Pinehouse, Saskatchewan. Residents contacted provincial officials to report irregularities and acts of intimidation at last week's advance poll in an effort to ensure a free and fair municipal election tomorrow.

Longtime Pinehouse resident John Smerek sent a letter to provincial government officials reporting irregularities in the advance poll held September 12. In the letter sent yesterday via email to Minister of Government Relations Jim Reiter and carbon copied to several other provincial authorities, Smerek highlighted process infractions such as the failure to abide by new voter ID requirements and acts of intimidation.

"I would like to see the people here have a free and democratic opportunity to vote without the fear or intimidation or false promises offered to them by the individuals that are sent out or hired by our leaders to intimidate the democratic process," Smerek told the Media Co-op in an interview in Pinehouse.

One of the individuals in question is Vince Natomagan, who acts as a community liaison to the Nuclear Waste Management Organization (NWMO). He has an office in the village office building and works closely with the Pinehouse council.

Along with two other locations in northern Saskatchewan and more than a dozen in Ontario, Pinehouse is currently part of NWMO's search for a "willing host community" for Canada's high-level radioactive waste. In 2010, Mayor Mike Natomagan sent NWMO an Expression of Interest, initiating the community's inclusion in the site selection process for a deep geological repository for the used nuclear fuel bundles currently stored onsite at nuclear reactors in Ontario, Quebec and New Brunswick.

Five hundred kilometres north of Saskatoon, the northern village of Pinehouse is a predominantly Cree-speaking Metis community of approximately 1,000 people near the boundary between the Canadian Shield and Boreal Plain regions. It used to be the end of the road. Trucks now travel another 220 kilometres past the turnoff to the community up to the Key Lake uranium mill. Operated by Saskatoon-based uranium mining giant Cameco, the mill processes ore from the McArthur River uranium mine 80 kilometres further north. Open pit uranium mining at Key Lake itself ended in 2002.

Today, tensions in Pinehouse run high with the municipal election only a day away. Some residents are concerned that despite secret ballots, there may be negative consequences if they cast a ballot and the council believes they have voted for other candidates, whether or not they have, said Smerek.

"Our current leaders have hired people that work for them that go around making offers and directions that sound like a threat - that they won't be able to service the people if they don't vote for the current leaders. And they'll try to lead them directly to the polls," he said.

In one case identified in Smerek's letter, voters were threatened on their way to cast a ballot in the advance poll last week. According to an account of an incident by another resident who spoke on the condition of anonymity due to fear of reprisal, residents walking to the polling station were told by individual affiliated with the current council not to expect anything at all from the village in the future when they alluded to their plan to vote for candidates other than those on council.

Ministry of Government Relations Executive Director of Communications Jeff Welke responded via email to the Media Co-op's request for comment on the allegations of intimidation contained in Smerek's letter.

"References to attempts to bribe voters and/or otherwise influence for whom voters would cast their ballot are very serious allegations, and pertain to legal matters that are outside the Ministry's authority, as well as outside the authority of election officials, to deal with," Welke wrote to the Media Co-op. "Any person or persons who have experienced an attempted bribery, or who have witnessed such an attempt should consider contacting the nearest detachment of the RCMP as soon as possible. Alternatively, they could also proceed under the provisions of The Controverted Municipal Elections Act by contacting a judge and swearing out a complaint."

"I pulled out my wallet and asked, 'Don’t you need two pieces of i.d.' to which Nancy Misponas replied, 'No, don’t worry about it,'" states the affidavit, according to a copy of the text obtained by the Media Co-op. "None of the people lined up in front of me while I was there were asked to produce their identification.”

In his response to the Media Co-op, Welke explained that "province's role in the municipal election process is to provide for and maintain  the legislative framework under which the elections are run and to provide training, resources and advice to local election officials." Conducting elections in keeping with legislation is a municipal responsibility with no direct provincial oversight. However, he stated that local officials have been made well aware of elections procedures, including the new voter ID regulations.

"Prior to any round of municipal elections the Ministry holds workshops around the province for election officials...Pinehouse attended the May 9th session in Prince Albert. As well, the Ministry took extra measures to try and ensure that local election officials were aware of the new requirements including articles in 'Municipalities Today', guides and resources on the Ministry's website and the production of promotional materials that could be downloaded and used at the local level to help citizens become familiar with the voter ID requirement," wrote Welke.

"Ministry officials have also been in direct contact with local election officials in Pinehouse to reinforce the need to abide by all election procedural rules, including the new voter ID requirements," he wrote.

This year's municipal election is not the first time a resident has voiced concern about local governance and requested the intervention of the provincial government. In 2011, Fred Pederson wrote to Municipal Affairs officials requesting an investigation into the actions of mayor and council. He highlighted the alleged misuse of village funds, the appropriation of a youth centre, housing issues and intimidation.

"People feel threatened about losing their jobs because council sit on every board in town. So it influences people from feeling free to speak out or even votes during an election," wrote Pederson in his undated letter. "[The village] office is being used for their own benefit [and] every rule has been broken...all of them have [quit] their jobs to live off of the Village."

Pederson received a response from Colleen Digness, Manager of the Northern Municipal Administration, based in La Ronge. Her letter, dated November 30, 2011, outlines and includes the relevant sections of The Northern Municipalities Act, 2010, including section 128: "No member of council is eligible to be appointed as an employee of the municipality or of any committee or controlled corporation of the municipality in which he or she serves as a member of council."

After last week's advance poll, Pederson again contacted Municipal Affairs officials - this time by telephone - to report irregularities and request intervention. The response from the central office in Regina indicated that the issue was a matter for the La Ronge office. When Pederson contacted the Northern Municipal Administration in La Ronge, he was informed that his concerns should be raised with the local village council implementing the elections process.

Pederson is running as a candidate in tomorrow's election, on a platform based on honesty. He has been an outspoken critic of the potential selection of northern Saskatchewan for a nuclear waste storage site and of the process the council and the industry-led Nuclear Waste Management Organization have been pursuing during the site selection phase. They meet behind closed doors and the community is not informed of the meeting dates, Pederson told the Media Co-op in an interview last month.

Pinehouse is not the only place in NWMO's site selection process where a council has come under fire for undisclosed meetings with NWMO. Shannon Quesnel reported in the Elliot Lake Standard that a meeting between NWMO and the city council of Elliot Lake was the subject of a complaint to and ruling by Ontario's ombudsman. In her September 5, 2012 article, Quesnel cites Elliot Lake City Clerk Lesley Sprague: "The mayor and five members of this city’s council attended (the NWMO meeting). The ombudsman stated despite the fact the meeting was arranged and hosted by a third party, this does not relieve the municipality from giving notice of the meeting. And despite the fact the meeting was not closed to the public it is still considered to be a closed meeting because of the lack of public notice."

Back in Pinehouse, Smerek is an outspoken opponent of the consideration of Pinehouse and northern Saskatchewan for a nuclear waste repository. "Say No To Nuclear Waste" reads a sign on the front of his house, a stone's throw from the shore of Pinehouse Lake.

For now, though, Pinehouse residents are focused on tomorrow's election. Smerek hopes his letter will result in the presence of an outside election monitor to ensure due process - including the chain of custody of the ballots - is respected. He has also requested the presence of an RCMP officer to ensure no intimidation or threats take place at the polling station.

"I'm trying to get free and fair voting opportunities for our community," said Smerek.

Sandra Cuffe is a freelance journalist and a member of the Vancouver Media Co-op. She is currently in northern Saskatchewan.