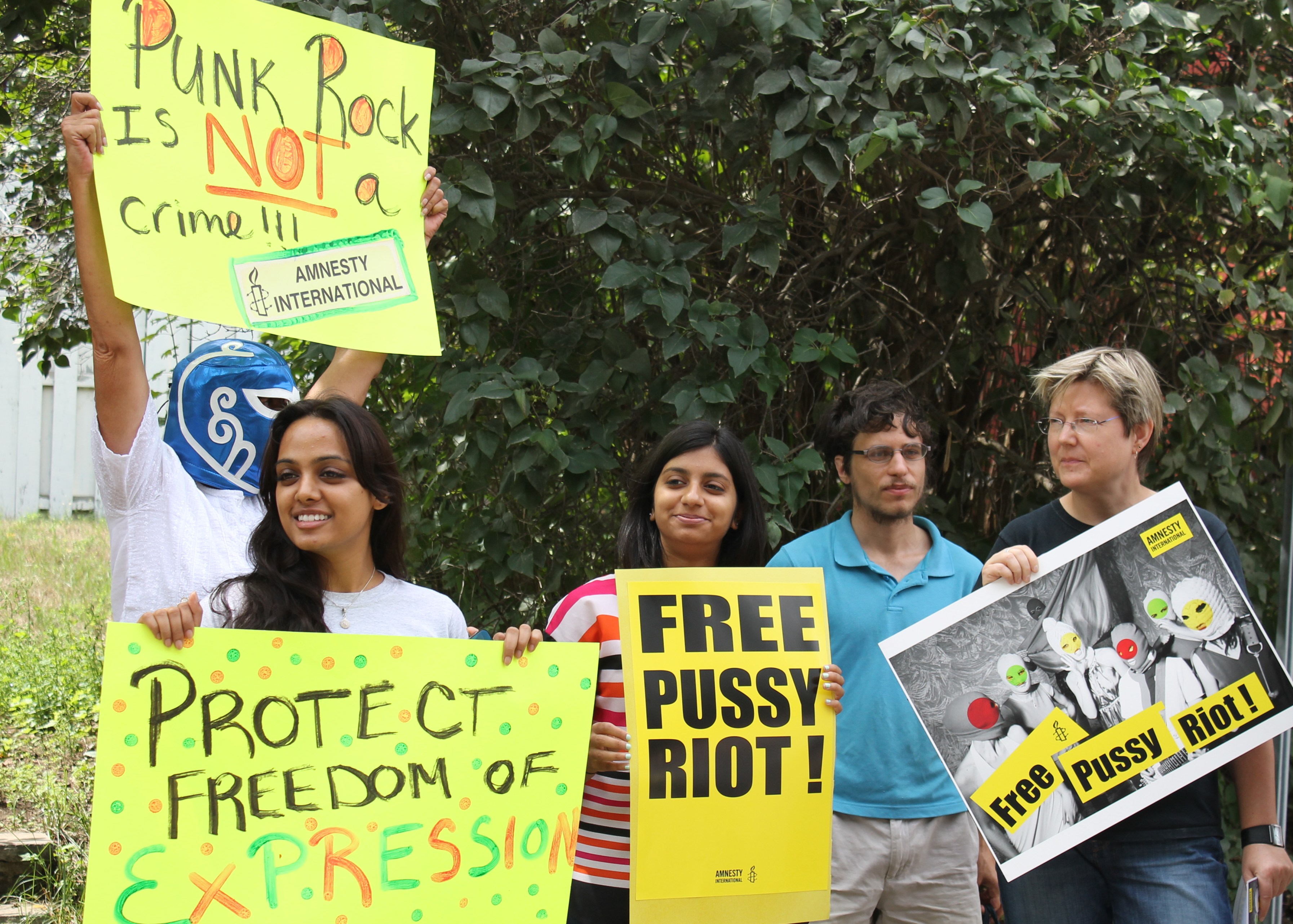 With files from Andy Crosby

Dozens of members of the Ottawa community gathered outside the Russian embassy, on Friday August 17th to protest a Russian court’s decision of convicting members of the punk band “Pussy Riots” of hooliganism motivated by religious hatred.

The three Russian band members are sentenced for two years in prison, after they staged a protest in Christ the Saviour Orthodox church in Moscow and performed a 30 seconds punk prayer asking the Virgin Mary to become a feminist and save Russia from Putin, on February 21st.

While the court viewed this action as a religion based action, many are opposing this verdict and referring to it as a political action.

“[The protest] was a statement that they were not happy with the political regime, so it is a political protest, people have said it is religious, it is not,” said Shauna MacLane of Amnesty International.

Amnesty International, along with Human Rights Watch and other international organizations, is defending Pussy Riot and considering this case a major violation of freedom of expression and an example of the Russian authority’s abuse of human rights.

“This is a case of freedom of expression and these women have been imprisoned solely for their peaceful protest, so they are considered as prisoners of conscious,” said MacLane. “We’ve always had these types of cases in Russia and since this government has taken power we’ve seen freedom of expression becoming very endangered in Russia.”

The trial has been facing worldwide opposition. A recent poll showed that many Russians believed that the women should not spend any more time in jail. Even Putin himself announced that he doesn’t think that they should be judged too harshly despite not thinking that there is anything good about the protest.

The convicted members have shown a very positive attitude towards the trial and consider the outcomes as a victory.

“Even so, I can now state—despite the fact that we currently have an authoritarian political situation—that I am seeing this political system collapse to a certain extent when it comes to the three members of Pussy Riot, because what the system was counting on, unfortunately for that system, has not come to pass,” wrote Nadezhda Tolokonnikova of Pussy Riot, in her closing statement.

This issue drew global attention, especially as celebrities such as Madonna, Paul McCartney, Sting and Red Hot Chili Peppers are publicly making statements calling for justice to the three band members. Ottawa’s protest was one of many held across the globe demanding justice for Pussy Riots, on August 17th.