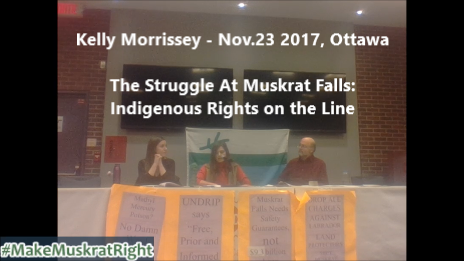 On the eve of Justin Trudeau travelling to Happy Valley Goose Bay, Labrador to present his government's apology to the residential school survivors of Labrador and Newfoundland, a public event in Ottawa addressed the current genocidal actions of the federal and provincial governments in their role with the Muskrat Falls hydro dam mega-project there.

Transcript of the short-version video of highlights from Kelly Morrissey speaking in Ottawa:

"And it is the eve of Justin Trudeau going to my hometown to apologize to residential school survivors, and there are members of my family who have gone to residential school; the first person who comes to my mind is my grandmother. It's very difficult - and you'll have to forgive my emotional response, or not, because I'm not sorry for it - as this is somthing that's impacted multiple generations of my family. I'm a Nunatsiavummiuk Inuk woman from Labrador, I was born and raised for the most part in Happy Valley Goose Bay and my family line comes from Rigolet."

"The real issue at hand here is that the government, at multiple levels, is responsible for funding a project that is poisoning Indigenous people in Canada's north, as well as settlers that live there."

"Justin Trudeau, in referencing Muskrat Falls directly, has said he wants his relationship with Indigenous people to be based on science. Well, we have the best scientists in the world [ie at Harvard] on the case, and you're still not buying it. The only thing you're buying is an additional loan guarantee - you're giving that to the government of Newfoundland and Labrador in order to continue this project that is creating cultural genocide on my people as well as others, in other groups."

"Take a moment to imagine if this was impacting you, if you had to question what you are going to eat, if you couldn't do the things that your mothers and your grandparents and your fathers and your aunts and uncles always did, those things that define you."

While the residential schools of the Canadian government fit with part 'E' of the definition of what constitutes genocide, as per the United Nations' Convention on the Prevention and Punishment of the Crime of Genocide - "Forcibly transferring children of the group to another group" - the current Muskrat Falls hydro dam developmenet project can be seen to fit under part 'C' of the definition of genocide: "Deliberately inflicting on the group conditions of life calculated to bring about its physical destruction in whole or in part."

This can be understood further from the extended-version video of the highlights of Kerry Morrissey's talk, and even further through the full panel discussion that also included Newfoundland-born Emily Philpott, currently at York University doing research on the Muskrat Falls situation, and Matthew Behrens, a long-time social justice activist who is one of the lead non-Labradorian organizers working in solidarity with the Labrador land protectors (the three spoke also spoke on a a similar panel discussion the night before in Perth Ontario, but that also featured Mireille Lapointe, former co-chief of the Ardoch Algonquin First Nation who helped fight uranium mining a decade ago in their territory of Eastern Ontario.)

The same evening (November 23) as the panel discussion in Ottawa, there was a sharing circle happening in Happy Valley Goose Bay that according to the Labrador Land Protectors "brought grassroots together (indigenous and settlers) in such a meaningful way with the federal government to speak out about injustices happening on their lands, to their waters, and having such an negative impact on their culture, lives, and next generations. This traditional sharing circle models peacefulness, truth, and respect in a powerful way. We are teaching decolonization to the Canadian government who are enabling destruction in our territory." The full statement and video from that event can be found on their Facebook page: https://www.facebook.com/labradorlandprotectors/videos/520018258360491/

Petition: A call to to suspend the dangerous actions at Muskrat Falls, Labrador
https://www.change.org/p/a-call-to-suspend-the-dangerous-operations-at-muskrat-falls-labrador

Sorry Means You Don't Do It Again
November 23, Homes Not Bombs
http://homesnotbombs.blogspot.ca/2017/11/sorry-means-you-dont-do-it-again.html

Muskrat Falls inquiry 'very much about money' and 'not about people,' says Indigenous group advocate
November 21, CBC The Current
http://www.cbc.ca/radio/thecurrent/the-current-for-november-21-2017-1.4410676/muskrat-falls-inquiry-very-much-about-money-and-not-about-people-says-indigenous-group-advocate-1.4410679

OTTAWA – On the eve of Justin Trudeau's apology to Labrador residential school survivors for a historic act of cultural genocide, those concerned about the genocidal implications of the massive Muskrat Falls megaproject will speak tonight at the PSAC Hall, 233 Gilmour Street, in Ottawa. The federal government has $9.2 billion backstopping a project that endangers Indigenous people and settlers alike with meythlmercury poisoning while also posing the risk of catastrophic dam break due to its construction on sandy quick clay, which moves when subjected to pressure.

Among the speakers is Kelly Morrissey, a Nunatsiavummiuk Inuk woman who’s especially worried about family members in Rigolet, a Labrador community where methylmercury levels could skyrocket as high as 1500% according to a 2016 Harvard University study. Also speaking is Newfoundland-born Emily Philpott, currently researching the devastating economic, social, and spiritual impacts on residents downstream of Muskrat Falls, and Matthew Behrens, coordinator of the Ontario-Muskrat Solidarity Coalition.

"We find a huge irony in Trudeau apologizing for one act of cultural genocide while he supports a project which will finish off the genocidal mandate of residential schools through the same kinds of poisoning that have devastated the community of Grassy Narrows, Ontario," says Behrens.

Speakers will be calling for a suspension of operations at Muskrat Falls until Indigenous people have been fully consulted and that free, prior and informed consent has been achieved as mandated by the United Nations Declaration on the Rights of Indigenous Peoples, which Canada says it will respect. They also want a fully transparent review of all parts of the project, from its false claims to being a green energy project to the failure to respect science-based reporting that has called into question the validity of the project.

The event comes as Crown-Indigenous Relations Minister Carolyn Bennett meets with Labrador Land Protectors tonight in Happy Valley Goose Bay, a meeting that only came about because of an October 1 occupation of Minister Bennett's Toronto office. Earlier this week, the provincial government announed an inquiry into the Muskrat Falls dam project, which has ballooned to over $12.7 billion in cost, more than double the original estimate. Critics say the inquiry is a distraction and meaningless as long as construction continues.